Escaping Me by Elizabeth Lee will be on sale from
August 2-9! Check out the excerpt below and grab the book today! 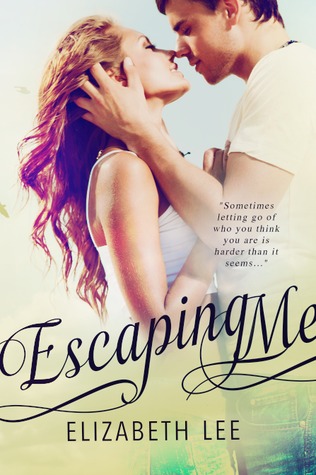 Title: Escaping Me
Author: Elizabeth Lee
Age Group: NA
Genre: Contemporary Romance
Published: July 30, 2013
Goodreads
Description:
All she wanted to do was forget. Forget the memory of walking in on her boyfriend in the middle of, well, another girl. Forget how she had her entire life planned out. And, forget about being perfect all the time. Unfortunately, she was Whitney Vandaveer and despite the fact that she moved to the middle of nowhere – she couldn’t.

He always knew he would never be more than nothing. No job, no money, no future. Cole Pritchett had accepted the fact that he would always be the screw up and he was okay with it. Until he met her.

Here’s the thing they quickly found out – sometimes we all need a little help escaping who we think we are.

Excerpt:
I hold my head back and walk toward the delivery truck.  Cole’s eyes are down on the clipboard he is holding in his hands as he double-checks what he has to take off the truck.
“You’re a little late to take me up on the drink offer,” I tease as I cross the gravel drive toward him, shuffling my flip-flops against the rocks.  I am hoping that maybe he is a morning person and will be in a better mood than the last time I saw him.  No such luck.  He looks up at me quickly, adjusting the bill of his hat to shade his face, and then back down at his clipboard.  Not even the hint of a grin on his lips. Wow.  His expression is as cold as it was last night when he walked away from me.  He shakes his head, albeit subtly, but to me it is like a flashing neon sign that says, “Go away.”
He sets the clipboard down on the hood of the truck, his eyes never once drifting back to mine.  Instead, he turns his back and walks behind the truck.  He lowers the gate and pulls the pallet lift, loaded up with whatever it was my
mom ordered.  As he lowers the lift to the ground, he keeps his focus on what he is doing.  It is painfully obvious that he is avoiding looking at me.  Maybe I should have looked in the mirror again? I thought my fitted pink t-shirt and black cotton shorts were cute pajamas. Maybe I was wrong.  Do I look that horrible this morning?
“Just put it outside the barn doors over there,” I say between clenched teeth.  Who the hell does this guy think he is?  Never in my life have I been so callously ignored.  I glance over my shoulder at my mother and Mallory, who are still watching from the kitchen window.  I roll my eyes at them and turn back to see if Mr. Personality has finished what he came here to do.  As infuriating as this situation is becoming, I can’t help but notice how fantastic his ass looks in his
jeans.  The worn denim hangs from his narrow waist perfectly—not cowboy tight and not gangster loose.  The gray t-shirt that is stretched across his back reads Wilson Lumber Yard with their catchy slogan underneath—“We
Got Wood”.  I fight back a giggle.  At least someone has a sense of humor.  He unloads the pallet and has the lift back in the truck, all while managing to completely not acknowledge my existence.
“I’ll just go ahead and sign for this so you can be on your way,” I say as he climbs out of the back of the truck.  This time, the icy tone of my voice catches his attention. I can feel his eyes on me as I walk to the front of the truck.   “I’d
hate to keep you from the obviously more important things you would rather be doing.”  Leaning over the hood, I
pull a pen from the holder on the top of the clipboard.  My frustration with his attitude is made perfectly clear as I furiously click the plunger on the top of the pen.  My eyes are busy scanning for the space I am supposed to sign when a sudden shadow is cast over my shoulder.  I can feel his breath on my neck and his body resting behind mine.
It must be the nature of the position we are in because I have to fight the urge to back into him.  To feel his hard body against my backside.  My skin is on fire and my brain immediately tries to reason that it is anger as opposed to something else.
“Do you mind?” I snap, turning to tell him to back off.  But he doesn’t. Instead, he places his hands on the truck,
catching me between his muscled forearms and pinning me between his delicious body and the truck.  Even under the
bill of that hat he is always wearing, I can see his shaded eyes narrow in on mine.  It isn’t with contempt or agitation—it is something else.  Yes.  He is looking at me like he wants to tear my clothes off, and I would let him.
He closes the distance between us.  Here we are, chest to chest.  The air around me instantly thickens, making it nearly impossible to breathe.  His eyes go to mine and then to my lips, the same way they did at the bar.  He takes in a shallow breath, and I can tell he is having a hard time breathing, too.  I’m not sure if I should duck out from under him and run or throw myself against him.  I’ve never been so intimidated or so turned on in my life.  It is infuriating.  He licks one corner of his lips and I think for sure he is going to kiss me.  Seconds tick and he still hasn’t moved.  Is he waiting for me to give him the okay?  Does he really want to kiss me?  I raise my chin slightly and let my eyes close.  I hold my breath, waiting for his lip to fall on mine, and forget every reason I should be mad at him for.  That is
until he utters three words that manage to remind me.
“No signature required.”

Born and raised in the middle of a Midwestern cornfield (not literally, that would be weird), I’ve spent my entire life imagining stories. Stories where the right guy always gets the right girl, first kisses are as magical as they are on the big screen and anything is completely possible if you believe.

Although this journey began years ago, it recently took on a whole new life. After years of devouring hundreds of Romance, YA and New Adult novels, I had an epiphany… I should write a book. And I did it!

If I’m not reading, writing, enjoying drinks with my amazing group of girlfriends or chasing around a sarcastically funny kid, I’m probably watching television shows that were created for teenagers, while my husband teases that I’m too old to watch them.