After a photograph of Luc Moretti saving a tourist hits social media, he instantly becomes New York’s most famous and beloved cop. When a major network decides to run a special on the “American Hero,” Luc’s boss gives him no choice but to cooperate in the name of good exposure for the department. Luc doesn’t mind the celebrity status-what he does mind is the gorgeous brunette journalist who’s been assigned to follow his every move. Especially since she also happens to be the same knockout that rejected him rather publicly the week before.

Ava Sims is a woman who gets what she wants. And what she wants is to be CBC’s lead anchor-but to get there, she’ll need to nail the fluff piece on the playboy cop. Luc Moretti is everything Ava knows to stay away from: a stubborn charmer with a hero-complex. But the more Ava gets to know Luc and his oddball family, the more she realizes that beneath the swagger and the blue uniform is a complex man who makes her heart beat too fast. Soon, Ava’s doing the unthinkable, and falling for the best of New York’s finest …

A woman stood in the back corner of the room, helping herself to coffee from the fancy coffee machine Brinker kept for his own personal use.

Her body was mostly hidden by one of the horrible potted plants that Brinker’s wife insisted gave his office “homey character.”

And then she stepped into plain view.

He couldn’t help it; he checked her out. Everything about the woman demanded a second look, the legs in particular.

Luc had never really considered himself a legs-man, being more of an “equal opportunity” guy when it came to female body parts. (Although, if his mother ever asked, he’d swear up and down that he only ever noticed personality. Maybe the eyes.)

But the legs on this one were damn near perfect. For that matter, the high breasts and slim waist also earned high marks.

Her subdued black skirt and white blouse should have been boring, but they’d obviously been perfectly tailored to fit her trim frame perfectly.

The black high heels were icing on the already perfect cake.

Then he looked at her face, and for a second, Luc felt just a little bit dazed.

If anything, her features were even more perfect than the body. Her eyes were maybe just slightly too large for her otherwise petite features, but there was no doubt about it, the woman was stunning.

And yet, there was something else there too, just beyond the jolt of sexual awareness.

Luc might not have his brother Vincent’s photographic memory, but he was pretty damn good with faces. And he was pretty sure he knew this one. His brain scrambled to place her, but he kept coming up empty.

Her eyes narrowed almost imperceptibly on Luc, and his narrowed right back. He definitely knew her from somewhere.

She gave him a slow, knowing smile. “Fifth and Fortieth, three years ago.”

He shook his head to indicate he didn’t follow.

“You’re trying to figure out how you know me. Three years ago, you gave my news van a parking ticket, and we exchanged…words. That’s where you know me from. I’m Ava Sims.”

Lauren Layne is the USA Today Bestselling author of more than a dozen contemporary romance novels.Prior to becoming an author, Lauren worked in e-commerce and web-marketing. A year after moving from Seattle to Manhattan to pursue a writing career, she had a fabulous agent and multiple New York publishing deals.

Lauren currently lives in Chicago with her husband and plus-sized Pomeranian. When not writing, you’ll likely find her running (rarely), reading (sometimes), or at happy hour (often).

Cara, a powerful Moirae, finds herself stranded on Earth made human by an enemy of her mother, Fate. Lost and alone, she is forced to accept the reluctant help of Jericho Hawk. Jericho is determined not to become involved with Cara, even as their sexual attraction for each other cannot keep them apart. When Cara’s Cousin Grimm appears and proves Cara’s crazy stories are actually true, he must overcome the horrors her mother is responsible for to gain an eternity with the woman he has come to love.
BUY NOW ONLY $0.99
Amazon | Amazon UK | B & N | iBooks | Kobo

“Yes.” Cara nodded happily.  Jericho nodded before getting up and getting redressed.  When he was done, he bent over and picked up her clothes and handed them to her.

“You might take a hot shower; it will help with the soreness.”  Cara blushed as she raised herself into a sitting position.  Cara frowned as he started gathering dishes and empty bottles.

“I will.” She watched as he carried everything to the kitchen.  She dressed as she heard running water, knowing he was doing the dishes.  Cara was unsure of what to do, having never been in this position before.  When Jericho reentered the room, she was still sitting on the couch waiting for him.  She had royal blood in her veins and she had too much pride in herself to hide herself away in her room.

“I thought you were going to take a shower.”

“I was hoping you might like to take one with me.”  Cara gave him what she hoped was a seductive smile, but having never given one before, she could not be sure.

“Have a postmortem of what happened.”

“I don’t understand.”  Cara tried not to be hurt at his attitude, but it was really hard when he was staring at her with such cold eyes.

“Look Cara, I really don’t want to hurt your feelings, but I didn’t want anything but sex.  Now that the need has been taken care of, I’d like to go to bed.”  Before he could continue on, Cara interrupted him.

“So you got what you wanted; now you’re done with me?”  Desperately, Cara tried to keep the anger out of her voice.

“I was born in a small town in Kentucky. My family began poor, but worked their way to owning a restaurant. My mother was one of the best cooks I have ever known, and she instilled in all her children the value of hard work, and education.

Taking after my mother, I’ve always love to cook, and became pretty good if I do say so myself. I love to experiment and my unfortunate family has suffered through many. They now have learned to steer clear of those dishes. I absolutely love the holidays and my family puts up with my zany decorations.
For now, my days are spent writing, writing, and writing. I have two children who both graduated this year from college. My daughter does my book covers, and my son just tries not to blush when someone asks him about my books.
Currently I am writing five series of books- The Last Riders, The VIP Room, Predators MC, Biker Bitches, and The Dark Souls.
All my books are written for one purpose- the enjoyment others find in them, and the expectations of my fans that inspire me to give it my best.”
Website | Facebook | Twitter | Goodreads

Want more of the Dark Souls?

“One of the top five New Adult romances of 2013.” —A is for Alpha, B is for Book Blog
SYNOPSIS:
What happens when the perfect girl makes a very bad list?
Born into a life of privilege and secrets, Nora Blakely has everything any nineteen-year-old girl could desire. She’s an accomplished pianist, a Texas beauty queen, and on her way to Princeton after high school. She’s perfect.
Or is she?
Leaving behind her million-dollar mansion and Jimmy Choos, she becomes a girl hell-bent on pushing the limits with alcohol, drugs, and meaningless sex. Then she meets her soulmate. But he doesn’t want her.
When it comes to girls, twenty-five-year-old Leo Tate has one rule: never fall in love. His gym and his brother are all he cares about…until he meets Nora. He resists the pull of their attraction, hung up on their six year age difference. As they struggle to stay away from each other, secrets will be revealed, tempers will flare, and hearts will be broken.
Welcome to Briarcrest Academy…where sometimes, the best things in life are Very Bad Things.
**Recommended for mature audiences 18+ due to strong language and sexual content.

Ballerina Dovey Beckham is a scholarship student at Briarcrest Academy determined to prove she’s more than just a girl with the wrong pedigree. She does whatever it takes to succeed in her endgame, even if it means surrendering her body but never her heart.
Until the day she meets him, and he rips apart all her well-laid plans. Suddenly, the girl everyone thought unbreakable might just shatter.
Cuba “Hollywood” Hudson is rich, spoiled, and a star football player. With his fast cars and superficial girlfriends, he lives the high-life, hiding his secrets from the world.
Until the day he meets her, and she offers him something he’s never tasted…love.
But once in a lifetime kind of love doesn’t come easy…especially when dirty money, past sins, and old flames come calling.
Welcome to Briarcrest Academy, where sometimes the best things in life are Very Wicked Things.
“…a straight-up brilliant Coming of Age novel…” ~Cris at The Book AvenueEach book can be read as a standalone. Here is the series reading order.

**WARNING: This new adult romance is dark and edgy with mature content. 18+

99c Sale – 3 books in 1!
Take advantage of this fabulous deal from Amie Nichols. All three full-length novels from her Deep Blue Series have been combined into this fabulous omnibus.
For three days only, you can purchase all three novels for just 99c by downloading this series edition. To celebrate, Amie has put together a fabulous giveaway too.
Amazon US ~ Amazon UK ~ Amazon AU ~ Amazon CA 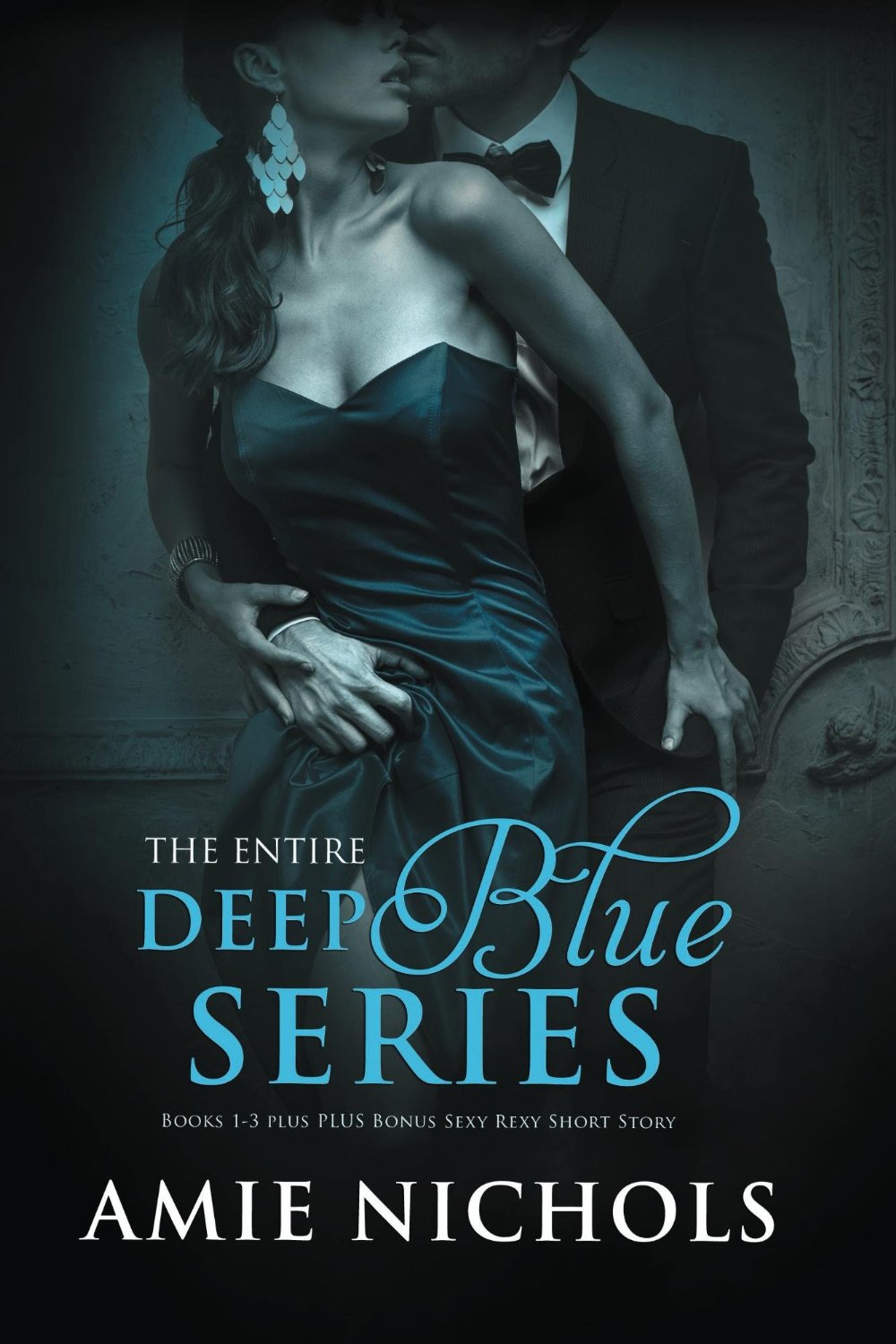 Deep Blue Impact,
Book 1
Aubrey Jackson ran, and ran far after a horrible tragedy that happened in Texas as a teenager. Moving to London to attend school she returns to the states after her father dies. Taking over his company, she’s committed to succeeding. She isn’t interested in a relationship, wanting to settle into her new life before even dating.
But Ian Bradson saw her, and he had to have her. Unable to control the chemistry between them, Aubrey gives in to the one thing she swore not to do.
Their chemistry keeps them coming back to each other, and Ian is on cloud nine.
When Aubrey’s past is thrown at them in the most unexpected way. Aubrey shuts down, and Ian is afraid he will lose her. And that is simply not an option.