Tell Me When by Stina Lindenblatt is on sale for a limited time! Check out the excerpt below and tell us what you think! 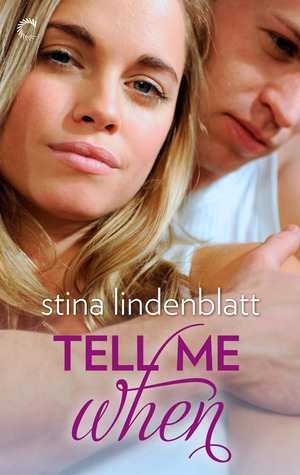 She shouldn’t be waking up her college roommate with screaming nightmares. She shouldn’t be flashing back, reliving the three weeks of hell she barely survived last year. And she definitely shouldn’t be spending time with sexy player Marcus Reid.

But engineering student Marcus is the only one keeping Amber from failing her math course, so she grudgingly lets him into her life. She never expects the king of hookups will share his painful past. Or that she’ll tell him her secrets in return, opening up and trusting him in a way she thought she’d never be able to again.

I don’t know how long we’ve been chatting when Marcus glances over my shoulder, for a moment lost in thought. He then closes the space between us, so less than a foot separates us. His hand strokes up and down my hip, molding to my body. He lowers his lips to my ear. “If we’re gonna convince everyone you’re off limits, we need to do more than just stand here and talk. Unless you want people thinking I’m your cousin.”

I swallow hard. “What do you have in mind?”

“Maybe this….” He brushes his fingertips against my neck and moves my hair back, exposing my skin. His head drops and his warm lips teasingly caress my neck.

Fortunately if Jordan sees him kissing me, she won’t clue into what’s really going on. She’ll think we’re hooking up after bumping into each other here.

Or at least I hope that’s what she’ll think.

His tongue flicks against the skin he just kissed. I jerk away.

Relax. Trent used to do that all the time and you never freaked out.

“Whoa, Kitten. I’m not going to hurt you. I’m not that asshole from the party.”

“I know. It’s just…it’s just….” My voice fades away, drowned out by the music.

Encouraged by my response, Marcus leans in and his lips meet mine, softly, sweetly. But he’s not satisfied enough with that. His lips try to pry mine open.

His mouth presses against mine, hurting me, violating me. I want to scream for him to stop. But that’ll make things worse. He always punishes me when I resist.

My body tenses, heart beating loud and fast, breath equally fast and shallow. I squeeze my eyes shut for a second, fighting against the memory.

Marcus pulls away and searches my face. “It’s okay, Kitten. I swear I’m not going to hurt you.” His fingers brush against my cheek. “You’re safe.”

I can tell from his expression he wants to ask who the hell hurt me. I don’t want to tell him. This is my secret. 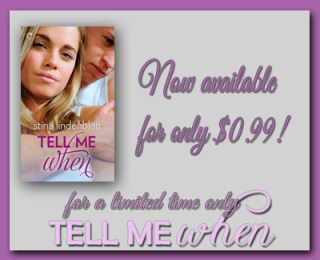 Be sure to add Let Me Know to your TBR! 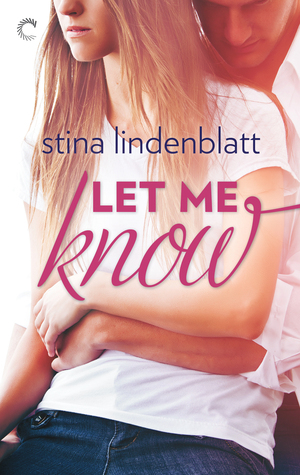 Stina Lindenblatt lives in Western Canada, where she loves to dream up New Adult and Young Adult stories, especially those with romance. She loves to travel, and has lived in England, the US, Canada, and Finland. She has a Master’s of Science degree in exercise physiology and has worked with elite athletes. In her free time, Stina enjoys photography, especially the close-up variety. She is the author of TELL ME WHEN (01/20/14).
Website | Twitter | Facebook 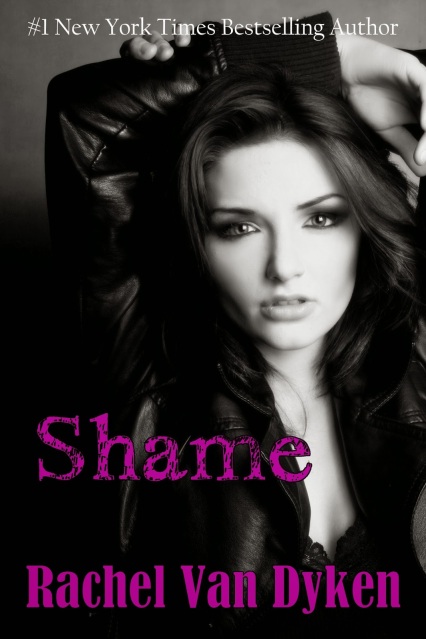 Everything done in darkness, will eventually be brought into the light.

I ran, but all it did was keep me one step ahead of my past. I tried to start over; new name, new identity. But you can’t change your soul.

A fresh start at college was just what I needed. For a while, it worked. I was the party girl, the one that seemed confident, but it was a lie.

When they touched me–Nothing but fear.

Deep inside, every girl wants to be the beauty in the story, to find someone that will see you as their world.

But the truth? I was the beast. And as much as I wanted redemption, I wasn’t fool enough to think I’d ever get it.

Until he walked into my life.

But I was powerless to stop myself from falling.

And he was powerless to catch me.

You think you know my story, but you don’t….after all everyone has Shame in their lives– and I’m no longer afraid to show you mine.

“Just hold still!” I yelled, holding up my phone while Gabe gave me the finger. I grimaced and dropped the camera away from my face. “Nice, thanks for that.”

Saylor, his wife, smacked him on the arm and rolled her eyes.

I scrunched up my face when he leaned in and took Saylor’s mouth with his, kissing her senseless in the local Starbucks like they were doing a romance scene in a movie. I coughed.

So I took a picture.

I earned another finger, but Gabe still didn’t dislodge from his wife.

“Whoa!” Wes’s voice sounded from behind me. “They been at it long?”

“Are all newlyweds disgusting?” I voiced aloud.

Wes moved around the table with his wife, Kiersten, and gave me a goofy shrug. I wanted to roll my eyes, but Wes was too nice and hot. Let’s not forget the hot part. Both he and Gabe were like walking poster boys for GQ. Both blond, now that Gabe had decided to dye his hair back to his original color. It was like staring at two really bright superstars.

Hating them was like hating the Easter bunny. Try all you want, but you’ll eat every piece of chocolate in the basket, just you wait.

“So, classes?” Kiersten leaned forward. “I heard you got stuck with that hot new psych prof.”

Wes growled low in his throat.

“Down boy.” I braced my hands on the table and laughed. “Besides he’s not that hot.”

“A girl passed out.” Kiersten’s eyebrows shot up. “Like in class.”

“Dehydration?” I shrugged, taking a sip of coffee.

“Rumors…” Gabe backed away from Saylor, his lips swollen. “…are always based on truth.”

“So you really did do a naked dance in your underwear last week after getting drunk downtown at Pike Place Market?” I tilted my head and waited while Gabe rolled his eyes and popped his knuckles. “Exactly.”

He opened his mouth.

I took a picture.

With a grimace, he snatched my phone away from me. “Never thought I’d have to tell you to lay off the pictures, Miss Paparazzi.”

I slumped in my seat. “It’s for an assignment with that hot professor.”

I pinned her with a look. “Sarcasm, friend, sarcasm.”

“Boys get girls pregnant,” Gabe offered, while Wes choked on the coffee he’d just stolen out of my hand.

“You’re going to be a great dad.” I smiled sweetly. “What? You’re just going to lock your girls in their rooms and go—” I mimicked his voice. “—uh, you see boy parts are bad, they make girls have lots of babies, like rabbits, and you know how rabbits make dad nervous and—”

Saylor laughed quietly next to him then squeezed his arm.

“You okay?” Wes asked, his voice soft. He was way too perceptive for my taste. If I’d wanted to share, he’d be the guy I’d talk to, but I was a vault. Sharing meant admitting my guilt, and admitting meant I’d probably go insane just like he had.

“Yeah…” I straightened in my seat. “…I just don’t want to fail my class, and I need to write down nonverbal cues and take at least one picture. And pretty sure I need to ace this first assignment on account that I was late to my prof’s class, and I got in trouble.”

“He spank you?” Gabe’s eyes mocked across his coffee.

“Yes, Gabe,” I said calmly. “Because that’s how they punish bad students here at UW — with a yardstick and a smile.”

“I wish.” He whistled. “What I wouldn’t give to have Saylor—”

I plugged my ears.

He threw his head back and laughed while Saylor turned bright red and put her hand over his mouth to shush him.

“So…” Wes ignored Gabe as was his usual and leaned across the table. “…why don’t you take pictures of people here in the coffee shop? I mean, ask permission, but most people here are super interesting, right? Studying? Stressed out? Tired?” He pointed to a guy in the corner. “He looks like he’s running on five cups of coffee and one hour of sleep. Go ask, take the picture, make some notes, project done.”

“You make it sound so easy,” I grumbled.

I hung my head lower and grimaced.

“Phone.” He held out his hand and stood.

Within minutes, not only had he snapped two pictures for me but had taken notes on two pre-med students who had stayed up all night cramming for what they’d assumed would be a pop quiz, only to find out that they’d been in the wrong class on the wrong day.

“And that’s why I’m not pre-med.” Gabe shuddered.

“Really?” Kiersten asked. “I thought it was because big words scared you?”

“Spell it.” She smirked.

“So this professor…” Gabe changed the subject. “If he tries anything, use the Mace or the rape whistle.”

“Right.” I nodded. “I’ll be sure to do that. In class. With a hundred other students. When he looks at me cross-eyed.”

Rachel Van Dyken is the New York Times, Wall Street
Journal, and USA Today Bestselling author of regency and contemporary romances.
When she’s not writing you can find her drinking coffee at Starbucks and
plotting her next book while watching The Bachelor.She keeps her home in Idaho with her Husband and their snoring Boxer, Sir
Winston Churchill. She loves to hear from readers! You can follow her writing
journey at