Enter to Win a
Select Ebook Bundle from Loveswept

Perfect for fans of J. S. Scott and Emma Chase, Hendrix introduces the wild and sexy
Caldwell boys—three brothers who are living up to their legendary names in Detroit Rock City.Hendrix Caldwell wants nothing more than to revitalize the family bar—and tear downevery last reminder of his no-good father. But business isn’t the only thing on his mind. An explosive encounter with a stranger at a charity masquerade is just the distraction he craves, with no names and no strings attached. For Hendrix, sex is casual, and love is a four-letter word. His commitment is to his brothers, his bar, and his bike. So why can’t he stop thinking about the naughty Cinderella who rocked his world, then left him—and her panties—behind?Olivia Hemmingway knows fairytales are for little girls. Drowning in debt and hiding a shameful secret, she won’t be saved by a knight in tattooed armor, no matter how mind-blowing their one-night stand may have been. Olivia never expects to meet her masked lover again. But when she takes a job at Hendrix Caldwell’s bar, her sexy new boss seems all too familiar. And once the lights go out and the music is turned up, the sparks between them burn hotter than ever.
BUY NOW
Amazon | B & N | iTunes | Kobo

When you think of Motor City, you think of poverty, but what Detroit lacks in class and elegance, we make up for in dive bars. You got the 2-Way Inn on Mt. Elliott, Nancy Whiskey on Harrison, Old Miami on Cass, Greenwich Time in Cadillac Square, Kwicky on 8 Mile, Marshall’s on Jefferson, Jumbo’s on 3rd, the Painted Lady up in Hamtramck, My Dad’s Place on Kercheval, and Caldwell’s on Atwater.

You know the kind of places I’m talking about—windowless joints on the corner with the High Life sign blinking because you know the sign is as old as the paint-chipped building it hangs off. The blinking sign beckons you. You have to go inside to see what the hell is going on ’cause you can’t see in the windows, and it sounds like you may be missing something if you don’t.

They are boarded up tight, because they got busted out two nights ago when the place got robbed by the fucking thugs who walk up and down the streets, selling candy one minute and panhandling two hours later. The pieces of shit are inventive—I’ll give them that—but my suggestion is get a fucking job, slob.

Back in the day, when the auto factories dominated the area, things didn’t look so broken down. It was alive and kicking. The area was still peppered with bars. Bar owners were making mad cash, too.

At the end of every street, there was a joint that served ice-cold High Life on tap and two-dollar shots. There was entertainment and fun to be had everywhere. You could always get a decent, quick meal on your lunch break, a live show at night; and the bartenders made you feel like you belonged, like you were family.

My pops won the title to Hooligans at a dogfight. With it being a great location in the Rivertown district near Chene Park, he truly got a prize that time. He was instantly banking money and banging women. That’s when he met Mom.

She sang, played guitar, and had a decent following as a one-woman show. He was thirty, and she was twenty-two. She sang at his bar every Wednesday night and eventually tended bar three nights a week. Like many of his barmaids, she fell for his bullshit, and that ended up with her pregnant with me in less than two months from the time they met.

He moved her into his apartment above the bar and embraced becoming a father. He wanted to do it better than his old man had. Isn’t that the truth in life, just do it better? Don’t we all strive for that?

Eventually, the novelty wore off. He started fucking around on her. When she confronted him, he beat her down emotionally. She busted her ass keeping the bar clean, and he busted his ass drinking the profit. Two more boys later, and she was busting her ass to raise their three kids on top of keeping his business afloat.

When the economy in Detroit deteriorated, he lost what was left of his mind. He started coming after us for stupid shit like spilled milk, a LEGO on the floor, you name it. Hell, the wind blowing in the wrong direction had him on us.

Mom started stepping in with, “Boys, go to your room.”

Sure, we did as we were told, but we heard the shit. We heard him hitting her. It was no better than seeing it, either. We were helpless as the sounds of each blow became increasingly deafening to our tiny ears. Funny how, in the moment, adrenaline kicks in and instincts go into overdrive. Every noise becomes louder, clearer, and sticks with you longer. I can still hear that shit in my sleep.

As I grew older and stood taller than him, I began to step in. He and I would go at it, fist to fist, until one of us wasn’t moving. At first, it was me. Then, when I was seventeen, it was finally him. Fucker knew it, too.

I begged Mom to move out, but she refused to leave her home and family. She made excuses for him, said that was how he was raised.

He stopped coming at us when I busted his nose. I hated the bastard, and when Morrison was big enough, I moved the fuck out. Still saw Mom every day, though. I couldn’t go a day without seeing her or my brothers. I needed to make sure they were okay, but I also knew, if I stayed, I would kill him and be in the state pen within a year.

He lost Hooligans because the fucking asshole bet against the wrong underground fighter. Who was the fighter he bet against? My brother, his own son. Who did he lose it to? Me. Fucker didn’t even know it was me until a week later, either.

I let him stay in the apartment above the bar, not for him, but for Mom.

I had been working for a contractor, fixing up old warehouses and making them into apartments for years. Even made enough to buy my own place.

I fixed up the second and third floors, making them livable. Wide-open space, two bedrooms, two baths on the second floor, the third is my loft. The first floor is a badass garage. It is where I spend the rest of my money—on my tools, my toys, and my rides.

I roll over to find my pit bull, Floyd, is hogging the bed as usual. She—yes, Floyd is a she—is an obvious bed hog.

When I found her, she had on a pink, spiked collar that was digging into her neck. I squatted down and peeled it off the poor girl, and she let me. Then, she took off, and I followed her to an abandoned warehouse, walking into a fucking scene that makes my stomach churn to this day. Fucking dogfights.

My dad loves those godforsaken fights, while I despise them.

I called a cop friend I knew from high school while in an outside alley and then waited. When the fuckers running the circuit were taken in, along with the spectators, I watched the SPCA take the dogs. Floyd looked at me, I looked at her, and I knew she was mine.

“Floyd, seriously, bitch”—I laugh as she licks my face—“get down.”

I think I’m going to have to read more MJ Fields and Chelsea Camaron.  I wasn’t quite sure what to expect when I picked up Hendrix.

The first in the Caldwell Brothers series starts you off with a bit of heartache as we are introduced to three brothers that are at their dying mother’s bedside.  Hendrix is the oldest brother and he’s up first.  I thought the match up with Olivia was sweet.

I enjoyed the scenes with the brothers, Morrison and Jagger.  I’m looking forward to reading their stories too.

USA Today bestselling author Chelsea Camaron grew up turning wrenches alongside her father, which just so happened to inspire her Love and Repair and The Hellions Ride series. When she’s not writing, you can find her playing with her kids, attending car shows, going on motorcycle rides on the back of her husband’s Harley, snuggling down with her new favorite book, or watching any movie that
Vin Diesel might happen to be in. She lives in Louisiana with her husband and two children. 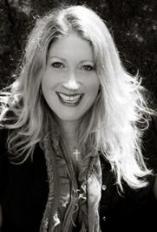 MJ Fields is the USA Today bestselling author of the Love series, the Wrapped series, the Burning Souls series, the Men of Steel series, and the Norfolk series. A former small-business owner who recently became a full-time writer, Fields lives in central New York, surrounded by family and friends. Her house is full of pets, friends, and noise ninety percent of the time, and she wouldn’t have it any other way.
Website | Facebook | Twitter | GoodReads
Want more Caldwell Brothers?
Pre-Order Book Two
MORRISON
Releasing Dec 1st, 2015 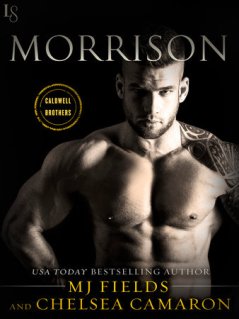