Enter to Win a
Select Ebook Bundle from Loveswept

THE HEAT OF THE MOMENT
The Boys of Summer #3
Katie Rose
Releasing Sept 22nd, 2015
Loveswept

The Boys of Summer are back! In Katie Rose’s sweet, sparkling novel, the newest New Jersey Sonic falls for the woman who’s trying desperately to save his career.

Physical therapist Jessica Hart has learned her lesson: Never date professional athletes. She’s been down that road, and barely recovered after the relationship crashed and burned. Then Jessica meets Gavin King. An All-Star slugger with chiseled good looks, Gavin was traded to the Sonics because he hurt his knee sliding into second, and now his future is in her hands. Gavin’s no bad boy—but he’s tempting enough to make Jessica think twice about all her rules.

Gavin is trying to find a comfortable routine. If he wants his old life back, he must take it easy, stay out of the limelight, and keep his distance from gorgeous redheaded physical therapists. The thing is, Gavin isn’t the kind of guy to sit on his ass and let other people pull his weight. And when he sees something he wants, he can’t help but fight for it, even if it means risking everything, even if it only lasts a single moment: like one kiss from Jessica.

“Gavin, you see those tweets about the game last night?” Arnie Lutz, outfielder for the Dodgers, approached the first baseman and held up his iPhone. “They caught that line drive you made in the ninth on video.”

“Screw that,” the catcher, Ron Sproules, said, throwing his glove onto the locker room bench. “I hear the chicks are starting a new fan club. Couple of us are the hottest guys in baseball!”

Gavin King came to stand behind Arnie as the outfielder scrolled through the tweets, pausing only when a female fan expressed her appreciation for his good looks, hot bat, or hard-muscled body.

“Hey, Gav, there is something about you!” He held up the phone so they could both look.

Gavin’s jaw dropped in shock as together they read the tweet:

Arnie glanced at Gavin before immediately pocketing the phone. “That doesn’t mean anything,” he said quickly. “You know how it is on Twitter. Most of it’s BS.”

He departed abruptly. Puzzled, Gavin saw the catcher whisper something to the outfielder, and they both looked his way. Before he could question them, Troy Hutchinson, the general manager, walked into the clubhouse.

“Gavin.” He gestured to their first baseman. “Got a second? We need to talk in my office.”

Gavin followed the man, totally confused. Out of the corner of his eye he saw that Arnie was studying his shoes, and the other players seemed to avoid eye contact as if he had suddenly acquired a contagious disease.

He and the general manager walked down the hallway into the executive suite. The Dodgers were known as a first-class ball club, and it showed from the polished hardwood floors, the gleaming offices, the richly appointed rooms with mahogany desks and framed artwork. Among the pictures adorning the wall were some of the all-time great players, Al López, Arky Vaughan, Babe Herman . . .

Gavin’s photo was positioned right in the middle. Although he had just been brought up from the minors the year before, the management had made it clear they felt he was destined for greatness.

Troy lifted a coffeepot and turned toward him with raised brows. When Gavin shook his head, he poured himself a cup.

“The management team has decided to make some changes,” he said as if discussing the weather, not the rest of his life. “I know we originally discussed a no-trade clause with your agent last year, but things are different now. We brought up a few promising rookies, our outfielder has developed into a better hitter than we anticipated, and we believe we have several options for first base. We decided to send you to New Jersey, effective immediately.”

Stunned, Gavin stared at the coffee mug in disbelief before shifting his eyes back to the man before him. His ears were ringing, and he felt light-headed, as if he might pass out. His stomach churning, he realized what this meant.

When he could speak, he looked the general manager in the eye. “I don’t understand. Why?”

Troy put the cup down and came to sit on the edge of the desk, and then indicated the upholstered leather chair before him. When Gavin sank into the luxurious butter-soft seat, Troy picked up a CD and tapped it against his fingers.

“We got the results back on your MRI.” His voice was lower, sympathetic but firm. “We don’t like it. Now I know,” he said when Gavin attempted to protest, “a lot of players tear a meniscus and recover completely. But it’s not a risk we are willing to take.”

“But the doctor said I’ll be fine—” This wasn’t just a bad dream. It was more like a nightmare.

“I’m sure you will be,” Troy said smoothly. “This is purely a business decision. You see, we can either invest in you, and take our chances, or we can put that money into half a dozen young prospects, figuring one of them will pan out. The organization feels that’s a better way to go.”

“But New Jersey, for God’s sake!” He got to his feet, anger beginning to replace confusion. He couldn’t help but glance once more at his picture on the wall, framed in California sunshine.

“We spoke to your agent a few minutes ago. Why don’t you give him a call, take your time to pack. We’ll miss you, Gavin, but it’s all part of the game. You know that.”

The first baseman rose from the chair and stormed out of the room. Technically, he had just been fired, dumped from a contending team to a second-rate ball club. Everything he’d hoped for, all of his dreams, now seemed to be circling the drain.

The Heat of the Moment is the third book in Katie Rose’s The Boys of Summer series.  Being a baseball fan waiting to see if her team will make the playoffs, a baseball romance is an additional way to stay entrenched in the season.

Rose and her The Boys of Summer series continues to deliver light and fun baseball romance.  I’m looking forward to reading about more of New Jersey Sonics. 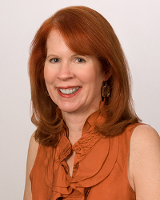 Award-winning historical author Katie Rose makes her contemporary debut with the Boys of Summer novels, Bring on the Heat and Too Hot to Handle, which combine Katie’s true loves: baseball and romance! When not watching baseball, Katie is at her lake house in New Jersey, hard at work on her next book.
Website | Facebook | Twitter | GoodReads