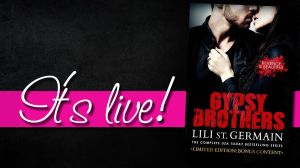 ALL 7 books in the COMPLETE Gypsy Brothers series are now in ONE SET!  This dark, adrenaline-induced, revenge BIKER series is ONLY $0.99 for one week.

DO NOT miss this epic sale!

If you are already a fan of the series — Lili has INCLUDED BONUS EXCLUSIVE NOVELLA!

NOW AVAILABLE at the following retailers: 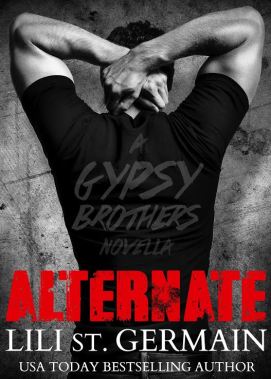 My father was most certainly NOT an innocent man. As the leader of the Gypsy Brothers Motorcycle Club, he was guilty of many things. But he died for a crime that he didn’t commit, framed by an enemy within who then stole his club and everything he had ever worked to protect.

When Dornan Ross framed my father, he set into motion a series of events that could never be undone. My father was murdered by Dornan Ross and his sons when I was fifteen years old.

Before my father died, Dornan Ross and his sons stole my innocence, branded my skin and in doing so, ensured that their lives would be prematurely cut short. That they would suffer.

But I didn’t expect to fall for Jase, the youngest brother in the club.

I didn’t expect that he would turn my world upside down, yank my heart out of my chest and ride away into the sunset with it.

Now, I’m faced with an impossible choice – Jase, or avenging my fathers death?

**This bundle contains all books in the Gypsy Brothers series plus a bonus exclusive novella.**

This trailer was shot on location in Venice Beach by Red14 Films, exclusively for Lili!

Confucius said, “Before embarking upon a journey of revenge, dig two graves.”

I planned to dig seven.

Sometimes I don’t think about it for hours at a time. Sometimes, a whole day will pass, and it’ll be there, under the surface, burning my insides with the brutality of its truth. My truth.

And I’ll get home from my dead-end job in this dead-end fucking town in the asshole of Nebraska, and I’ll have almost made it through a whole day of not thinking about it, about my father and Dornan Ross and his sons.

But then I’ll do something without thinking, like undress to go to bed, or slide under the covers of my bed. And I’ll see the marks they branded on my right hip – seven horizontal lines, each stacked on top of each other, made by casting the blunt edge of a butcher’s knife into fire and then pressing it into my flesh. A line for Dornan Ross and a line for each of his six older sons. Notches on a bedpost. Scarred for a lifetime so that I can never forget. Some are thicker than others, some short and others long, but each one a devastating reminder of everything they took from me that night.

Even if I stay in my stale clothes to avoid seeing my scars, I still can’t escape them. I never sleep well. I toss and turn, fitful and drenched in sweat, awakening from nightmares where they find me and turn the knife to the sharp side. Where they don’t just brand me – they cut me until I am dead, so I won’t talk to the police. I know things, see.  I know things that the police don’t, about purchased alibis and body disposal spots, about too many girls who went missing and too many men who kept too many secrets.

I used to wish every day and every night to forget about my fathers murderer and what he did to us. Not anymore. Now I want to remember every tiny detail so that I can exact my revenge.

Tomorrow is different. Tomorrow is my twenty-first birthday, the day I gain access to my secret inheritance. The several hundred thousand that my father managed to hide before Dornan framed him for the murder of a policeman and his family, a crime that Dornan and his eldest son committed as retribution for a drug bust that almost wiped the club out. It might be dirty money – my father wasn’t above money laundering and drug manufacturing – but it was his money. Dornan managed to seize control of the rest when he enacted his devastating betrayal.

Tomorrow is truly my birthday, for I will become another person. Today my name is Juliette Portland, but tomorrow I will wake up as someone else entirely.

Someone who will bring Dornan Ross and the Gypsy Brothers Motorcycle Club to their knees.

Lili writes dark romance, suspense and paranormal stories. Her serial novel, Seven Sons, was released in early 2014, with the following books in the series to be released in quick succession. Lili quit corporate life to focus on writing and so far is loving every minute of it. Her other loves in life include her gorgeous husband and beautiful daughter, good coffee, Tarantino movies and spending hours on Pinterest.

Pre-order your copy at:

No, I didn’t lose her. I threw her away.

She was my best friend.

I was never supposed to fall in love with her.

I thought I was doing fine. But here she is, years later, forced to work with me, reminding me why I fell in love with her in the first place.

And this time I’m going to do everything in my power to never let her go.

Haven’t read this series yet?

Start Mia & Jensen’s story for FREE at the following retailers:

(Prequel and is an addition –

Does not need to be read before Paper Hearts)

Claire Contreras graduated with her BA in Psychology from Florida International University. She lives in Miami, Florida with her husband, two little boys, and three dogs.

Her favorite past times are: daydreaming, writing, and reading.

She has been described as a random, sarcastic, crazy girl with no filter.

Life is short, and it’s more bitter than sweet, so she tries to smile as often as her face allows. She enjoys stories with happy endings, because life is full of way too many unhappy ones. 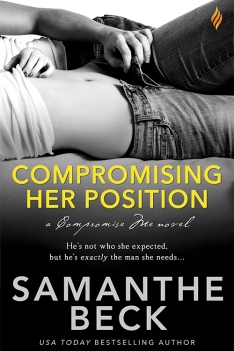 When Chelsea Wayne drags Santa into a supply closet for a little office party nookie, she assumes the man in the suit is her on-again/off-again coworker boyfriend. Instead, it’s Rafe St. Sebastian, a man known for his hard-driving ways in business as well as the bedroom—and, kill her now, the brand spanking new owner of Las Ventanas—who grants her naughtiest Christmas wishes.

So much for her reputation, not to mention her career.

Rafe needs to close three acquisitions to prove to his father he’s ready to take the helm of St. Sebastian Enterprises. A hot interlude in a supply closet after deal number two seems like the perfect illicit Christmas bonus. Unfortunately, when that “bonus” becomes the key to the final deal, he finds himself back in bed—so to speak—with Chelsea, and after their steamy tryst, he’s not interested in keeping things professional…

Add to your Goodreads Shelves 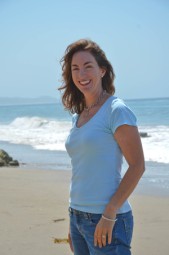 About Samanthe Beck:
Website * Facebook * Twitter
Wine lover, sleep fanatic, and USA Today Bestselling Author of sexy contemporary romance novels, Samanthe Beck lives in Malibu, California, with her long-suffering but extremely adorable husband and their turbo-son, Hud. Throw in a furry ninja named Kitty and Bebe the trash talking Chihuahua and you get the whole, chaotic picture.When not clinging to sanity by her fingernails or dreaming up fun, fan-your-cheeks sexy ways to get her characters to happily-ever-afters, she searches for the perfect cabernet to pair with Ambien.