The toughest rodeo rider in Hell, Texas, discovers his tender side with a feisty cowgirl in this sexy new novel from USA Today bestselling author Tina Leonard.

Cameron Dix knows that becoming an elite rider is the first step to realizing her dream: owning a special-needs equestrian academy. Only one thing stands in her way—and he’s big, tall, and sizzles like a Texas steak. Superhunk Saint Markham claims that he isn’t happy about all the women galloping into town, but the heat in his eyes tells Cameron a different story. What else can a fiery redhead do but let her hair down and give in to desire hot enough to melt her saddle?

Saint has seen what happens when women come marching into the Hell’s Outlaws Training Center: Strong men crumble. Problem is, he’s got rivals willing to train a talented lady rider like Cameron. But after one night of passion, he’s branded. And from the moment he kisses her ruby lips, Cameron is his—even if he’s too stubborn to admit it. Now Saint must stake his claim on a life of delicious sin with the woman he loves.

“What the hell was that?” Declan asked, making his way into the booth not a full minute after Cameron had departed it.

“What was what?” Saint was still trying to figure out what had just happened. His brain couldn’t stop wondering how a man who refused to give a woman what she wanted suddenly got the daylights smooched out of him.

It had been awesome.

Maybe saying no was the key to a woman’s heart.

“Cameron kissed you. I saw her as I came in.” Declan gazed closely at him. “You look shell-shocked, buddy.”

He was torn all to hell. “It was just a friendly peck.”

“It was not a friendly peck. Pecks last no more than two seconds, and usually only one. That little lady stayed on your face for a good five seconds, not that I was counting.” Declan laughed. “It’s just that when you’ve been a bullrider, your brain automatically counts. Definitely five seconds, brother. Three seconds more than friendly.”

“She wants me to train her out at Rory’s.”

“Oh.” Declan ordered a beer from Stephen, and the dinner of the night. You could order whatever you wanted from Stephen, but you’d get served what he wanted to give you. That was another one of Stephen’s quirks. Though the food could be good on a rare occasion, most times it could be barely digestible. But no one complained—everyone was just here for the companionship, anyway. “That redhead’s a firecracker, isn’t she?”

Saint could tell Declan was trying not to laugh, didn’t want to rub it in too much, though he obviously found the situation pretty funny.

“You know you’re going to give in eventually.”

“Don’t think so.” Saint lifted his beer to his mouth, barely tasted it going down. All he could taste were soft, sweet, raspberry-colored lips.

“Oh, you will. It just depends upon how hard you plan to fight it.”

“Pretty damn hard. All of us agreed, when Judy first came to us with her dumb idea for a team of Hell’s Belles, that we, the Outlaws, do not train women.”

“Rules are made to be broken. At least from Cameron’s perspective.”

He shrugged. “She’ll have to break them elsewhere.”

“This is exactly what got us in trouble last time with the Horsemen,” Declan said,

referring to their rivals across town. “The Hell’s Belles can train at Wild Jack’s with the Horsemen, probably for just about nothing.”

“The girls will never go out there again. We’re the only game in town, if Judy’s team is serious about training.”

“They’re serious. But if we won’t, they’ll find a way to make it happen.”

He heard the worry in Declan’s voice. “Look, just because Ava managed to make her way into the arena as a bullfighter doesn’t mean that’s going to become our business model. Judy needs to find something else to do with her team. That’s her problem, not ours.”

“Exactly.” Saint felt better, relaxed against the booth. They were a team, and this time they were sticking to the plan, the one they should have stuck to originally—which was no training women to bullfight at the Hell’s Outlaws Training Center.

No matter how sweet the kisses.

Tina Leonard delivers a well-written, character driven romance.  Saint and Cameron share a chemistry that is hot and not to be missed.  I loved that Last of the Red-Hot Riders is filled with characters that have you wanting to more about them and Hell, Texas.  This second book in the Hell’s Outlaws series is a fun, sexy read that I didn’t want to end. 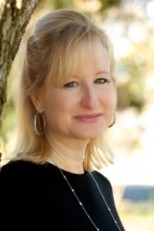 USA Today Bestselling and award-winning author Tina Leonard has sold over 3 million books, making the USA Today, Waldenbooks, Bookscan, and Ingrambook bestseller lists, and publishing over seventy titles. Her work has been contracted by Random House Loveswept, Samhain Publishing, Harlequin, London Bridge, and most recently Diversion Books. Leonard is known for her sparkling sense of humor, endearing communities, snappy dialogue, and memorable characters that include sexy hunks with attitude and heroines with plenty of sass. Join her at www.tinaleonard.com