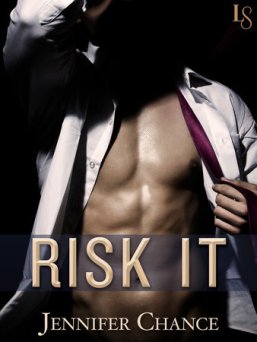 Jennifer Chance’s Rule Breakers series turns up the heat as a wealthy playboy and a beautiful con artist engage in a high-stakes game of seduction.

As dominating in business as he is in bed, Rand Sterling Winston IV always gets what he wants. And even before he realizes that she’s scammed him into paying triple the cost for her friend’s painting, he wants Dani Michaels. To catch her alone, Rand demands that she personally deliver his purchase. The attraction between them is immediate and electric, and he knows she feels it, too. So when the part-time petty thief rebuffs his advances, he gives her a choice: a night in jail or an evening with him.

Despite her checkered past, Dani has never met someone like Rand: brooding, intense, and oh so tempting. Only a man with a broken soul could make control feel this dangerous. Still, when Rand proposes a no-strings, no-holds-barred affair, Dani’s more than a little intrigued. It’ll be the trickiest con she’s ever run and a chance to indulge her steamiest fantasies—nothing more. But as their encounters grow increasingly intimate, Dani uncovers a vulnerable side to Rand’s steely exterior and opens her heart to the ultimate risk.

Rand didn’t try to stop her as she exited his office, the door to which was fortunately only locked from the inside. He didn’t say anything at all, in fact, and she felt the familiar rush of satisfaction, also spiced by the familiar taste of danger. This man was bad for her. He made her want to do foolish things.

But if they were foolish things that he couldn’t catch, well . . .

She’d made it all the way to the outer office when she glanced over to the lights on Pearson’s desk. They were flashing red now, but she didn’t think too much about that, given that the woman was gone and there was no one manning the phones. Then she punched the elevator button, and that flashed red as well.

Dani turned to see Rand silhouetted in the doorway of his office, the rain still pounding the glass of the windows behind him. It looked really cold out there, cold and wet. Which wasn’t going to be any fun at all, she had a feeling.

“Miss Michaels, it appears you have removed something from my office.” He held up the letter opener. “I’d thought I’d been quite clever, watching you as closely as I was. But once again, you have proven me wrong.”

Dani shrugged. “Score one for the con.” By his own admission, Rand hadn’t been the one to catch her. The flashing lights on Pearson’s desk console must be some sort of tech, quite a few levels up from the jobs she usually ran. And who microchipped crystal bunnies anyway, for the love of God?

Still, that didn’t mean she had to give in gracefully. He wanted to find the silly thing, that was on him.

Dani lifted her chin as Rand approached, his gaze drifting over her. She felt its scorching heat as he lingered on her neck, her breasts, her legs. “Now where could you have hidden something of mine?” he murmured. “Not your purse, I think. Too simple.”

That did make her smile. “Simple is sometimes smart.”

“And nobody would accuse you of not being smart—usually. And yet, you could have just walked away from my office without any memento at all, and guaranteed that you’d never see me again. Why didn’t you do that, I wonder?” Rand was close enough now to touch her, and he lifted his left hand to Dani’s temple, sliding it down until his fingers rested lightly on her neck, just over the point where her pulse was thumping quickly. Rand’s smile was all the acknowledgement he gave of her reaction, but it was his other hand she focused on as he traced the collar of her zip-fronted dress down, down, until his fingers caressed the small chrome pull between her breasts.

“I seem to recall this was zipped down just slightly further,” he said. “You’ll forgive me if I notice such things.” And with a quick, efficient move, he dipped his fingers into the vee of her neckline and drew out the tiny crystal rabbit, holding it up to the light. His gaze never left hers, however. If he’d tracked the spike in her pulse when his soft fingers had grazed her breasts, he gave no indication.

“Unfortunately, it’s not quite so simple as that.”

Rand’s voice was deliberately slow, lazy. As if he knew with each passing word her tension level would ratchet up a notch. “The system is alarmed to notify security automatically in the event of any breach, and given the nature of the work we do here, a uniformed police officer is on duty at all times. Those individuals are even now on their way up to arrest you, as a matter of standard procedure. I can call them off, of course. And I’m more than happy to do so.” His smile grew a little more certain, and Dani felt her back go up. “In exchange for dinner.”

She blinked at him, startled. “You’re going to have me arrested if I don’t go out with you?”

“Not at all.” Rand bent closer, his gaze never leaving hers. “I’m going to have you arrested for attempting to steal an item of extreme sentimental value from me. You will spend the night in jail as I decide what charges I’m willing to press for such a violation of my trust and my personal sense of security.” His lips twisted cynically, but the interest in his eyes was very real. He weighed the small crystal rabbit in his hand as if it were gold bullion. “Or, if you agree to have dinner with me, I’ll call off the police. It’s your choice.”

Dani sighed and shook her head, then leaned up on her toes to caress Rand’s lips with hers, and cup his chin with her hand. He really did have the most unbelievably beautiful mouth, she thought. It fit the rest of his criminally gorgeous face to a tee. She sighed as she eased back down on her platform heels, her fingers dropping to trace his lapel, smoothing his perfect suit against his perfect body. Then she smiled and met his gaze again, noting the hard, intense shot of victory in his eyes.

“I’ll take my chances in jail.”

I’ve enjoyed Jennifer Chance’s Rule Breakers series.  When I had the opportunity to read Risk It, the fourth in the series, I couldn’t wait.

I believe I would have liked both Rand and Dani had I read them as characters in other books.  But I would have been missing out.  They are a great match and make for a ‘could not put down’ read.  The twists and sexy scenes make for a fresh take on what could have been just another of the same.

I’ll be on the lookout for the next Jennifer Chance romance. 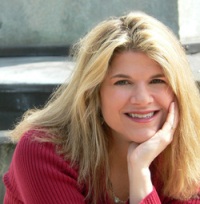 Jennifer Chance is the award-winning author of the new adult Rule Breakers series. A lover of books, romance, and happily-ever-afters, she lives and writes in Ohio.

I’m an Italian-Texan woman in a family full of cops. I’m passionate and shoot before I think. You only f*ck with me if you’re stupid.

Photograph cheating spouses. Hand over the evidence. Cash my check.

That was my plan when I returned home to Holly Woods, Texas, and became a private investigator.

Finding the dead body in my dumpster? Yeah… Given the choice, I think I would have opted out of that little discovery, especially since all three of my brothers are cops. And my Italian grandmother is sure the reason I’m single is because of my job.

Of course, my connection to the victim is entirely coincidental. Until I’m hired by her husband to investigate her murder and shoved bang-smack into the path of Detective Drake Nash.

My nemesis, a persistent pain in my ass, and one hell of a sexy son of a bitch.

Shame he still holds a grudge from that time I shot him in the foot twelve years ago, or we could have something. In another life.

So now all I have to do is avoid my nonna’s blind dates, try not to blackmail my brothers into giving me confidential police files, and absolutely do not point my gun at Drake Nash. Or kiss him. Or jump his bones.

All while I hunt down the killer.

(Twisted Bond is book one of the Holly Woods Files series and while it does not end in a cliffhanger, it is not a standalone.) 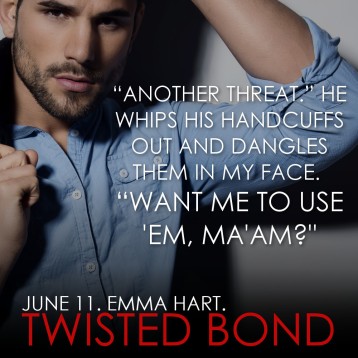 “Why are you here?”
He pulls his ear defenders down. “Out here?”
“Here.” I yank off my ear defenders. “At my parents’ for family dinner. Out here, bugging me. Take your pick. I’ll take a reason for either.”
“Your nonna appears to have taken a real good likin’ to me. If I didn’t know better, I’d say she’s tryna set us up.”
“Clearly, she’s losin’ her mind,” I snap, reloading my gun again before tucking it back into my boot. I fold my arms and meet his eyes. “And out here? Why are you here?”
Nothing. Just silence. Just those goddamned beautiful eyes boring into mine.
“No? Okay.” I walk past him, pushing hair from my face.
“Don’t go out with him again.” His arm shoots out to stop me, and his words hit me hard. “Gio.”
“Since when has it been any of your business what I do?” I face him, narrowing my eyes as our gazes collide. “Last I checked, I’m a single, grown woman, and if I want to go out with someone, I will.”
“He’s not the kind of guy you need.”
“Neither are you,” I reply, running my eyes down his white shirt, which is untucked over his dark-blue jeans. The bottom of his shirt is gaping, allowing me a view of a triangle of tan skin with a smattering of dark hair. I linger there for a moment before pulling my gaze back up. “Yet here we are, having this conversation, you thinkin’ you know what’s best for me.”

She likes to be busy – unless busy involves doing the dishes, but that seems to be when all the ideas come to life.