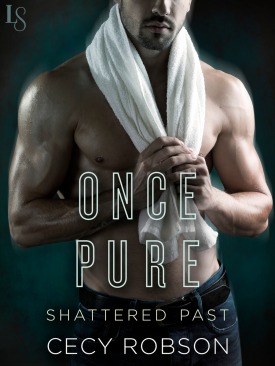 Once Pure
Shattered Past # 3

She bears the scars of the past. He blames himself for things he can’t control. Their defenses are up, but in Cecy Robson’s latest Shattered Past novel—perfect for fans of Monica Murphy and J. Lynn—true love lands a knockout punch.

Sofia Tres Santos remembers a time before her life went sour, before her innocence was ripped away, before she began punishing herself with risky behaviors and unworthy men. Now, at twenty, she just hopes she’s ready to rebuild some of what she lost. One way or another, it always comes back to her childhood friend and longtime crush, Killian O’Brien.

As strong as Killian is, Sofia has always been his one weakness. He knows Sofia has suffered and wants to ensure she’s never hurt again—not like before, and definitely not under his watch. When Sofia agrees to work at his mixed martial arts gym, Killian seizes the opportunity to help and protect the sweet girl he’s always cared for. And yet, as he trains Sofia to defend herself using his hard-hitting MMA techniques, he’s drawn to the vulnerable beauty in ways he never expected.

As Sofia grows stronger, she also grows brave enough to open herself up to love. And along the way, she challenges everything Killian believes to be true, showing him that no matter how much he dominates in the ring, the real battle is fought in the heart.

The steady pummeling of fists against the speed bag continued as if the body slams and swears weren’t bouncing off every wall of the MMA gym. Every strike, every blow, promised pain and demanded respect. I tried not to react to each loud smack, or cower from supersized bodies dripping with sweat, but it was hard. Controlled chaos was the best way to describe the scene unraveling before me. And no one owned it like Killian O’Brien.

I slipped my fingers into the computer bag hooked to my shoulder, pretending to fumble with the files tucked against my laptop, while totally checking out Killian behind the safety of my sunglasses.

His broad and muscular back was to me, but that was okay. I liked the way his Celtic cross tat crawled down the length of his spine and spread across his shoulder blades. I liked the way his wavy jet-black hair tickled the base of his skull. I liked the way—okay, who was I kidding? I liked everything about him. I had since I was seven, when he and his large Catholic family moved into the row home across from ours.

Killian hadn’t noticed me. He was busy kicking what remained of a heavy bag, showing the younger MMA brawlers how it was done. At six feet five, and fighting at super heavyweight status, Killian shouldn’t have been so flexible. But he was. Dear Lord, he so was.

His foot skimmed the top of the bag with each brutal thump, causing the chain holding it to rattle and jolt with hard shakes. Killian was best known for his kicks. If he caught his opponent in the face with his foot, the poor guy was done, and so was what remained of his face.

I jumped when the youngest O’Brien approached. “Oh. Hi, Finn.”

The dimple on his right cheek deepened when he grinned. He motioned to my nylon computer bag. “You ready to work?”

“Oh, yeah. Ready to go.” I patted the bag like a total loser, then rather awkwardly let my hand fall to my side. In an attempt to regain some sense of grace, I slipped my sunglasses to the top of my head, pushing the strands of my long, bouncy curls behind my ears.

Finn’s grin widened. He likely sensed my nervousness. His toothy smile made him appear younger than his nineteen years, but it was sweet enough to soothe the tension my first day back had caused. I liked Finn, I always had. He was smaller than his brothers, but just as tough, working his way up the MMA ranks as a welterweight.

He slapped his gloved hands together, full of energy as usual. God, it seemed, had dumped all the O’Brien muscle onto Killian’s heavy-duty frame. God was funny that way. That didn’t mean Finn wouldn’t take on a guy twice his size. Finn was funny that way.

He scratched the top of his curly ginger hair. “Killian know you’re here?”

“Ah, no, but that’s okay. I can just head to his office and start on his website—”

“Kill, Kill!” Finn cupped his mouth with his hands, yelling at the top of his lungs. “Your woman is here!” His attention cut to my mortified face. “You are his woman, right, Sofia?”

Killian’s head jerked our way, along with most of the behemoths training. I wasn’t sure if he could see how red my face was from where he stood, but the easy smile spreading along his strong features told me he could. He abandoned what remained of the heavy bag and crossed the padded floor as the rest of the fighters resumed their free-for-alls.

I froze, watching him prowl forward like the mad beast he was, his hulking and densely tattooed arms swinging loosely against his sides. It wouldn’t take him long to reach us, despite the large expanse of the converted warehouse, so I tried to speak fast. “I’m not his woman, Finn.”

“Finn, I’m not having this conversation with you.”

“Do you want to have it with Kill instead?”

“Have what with me?” Killian’s deep voice rumbled like thunder as he stopped just in front of me.

It had been a few weeks since I’d last seen him. Dark stubble grazed his chin, forming a mini-goatee and emphasizing the angles of his square jaw. But his face didn’t hold my attention for long. My stare traveled down his body, taking in his light skin glistening with sweat . . . before I remembered that my sunglasses now rested on the top of my head and I was blatantly gawking at him.

“I . . .” The urge to bolt had me shifting my weight, hard enough to slap the hem of my long white skirt against my bare legs. But I stayed put, trying not to faint from his scorching level of badassness and working to form a decent response. “I was just admiring your sweat.”

So much for a decent response. He stopped smiling. “My sweat?”

I punched him in the arm, because, yeah, I was just that lame. “Totally. You must have had quite the workout, huh, asskicker?”

Finn grimaced as if it pained him to watch me go down in flames. I was good with computers. I couldn’t say the same about men. If the fate of the world depended on me successfully interacting with the male species without stuttering, blushing, or recoiling, the world would just end and we’d all die some sick apocalyptic death.

Killian analyzed me closely like most would a bug they were debating on squashing, before his chest shook with laughter. God, this is Sofia. Please strike me dead.

Killian closed the distance between us, the fingertips of his large hand extending to tickle my chin. “I was just getting started. Nice to have a pretty girl appreciate my efforts.”

Finally, we get Sofia and Killian’s story!!   Since reading the first Shattered Past book, Once Perfect, I’ve been waiting for Sofia’s turn.  I think Killian is my new favorite…at least for now.

Although Once Pure can be read as a stand alone, the reader should read at least the first in the series to best understand the backstory.  I did appreciate that it wasn’t only Sofia that we see develop throughout the story.  Killian.  I loved that this intimidating fighter has a soft spot and doesn’t quite know how to get what he wants.

I’m looking forward to reading more in the Shattered Past series. Can’t wait for the next one! 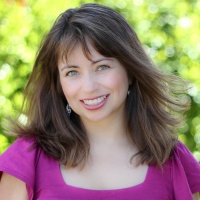 Cecy Robson is the New Adult author of Once Perfect, Once Loved, and Once Pure and the award-winning author of the Weird Girls urban fantasy romance series. A self-proclaimed professional napper, Cecy counts among her talents a jaw-dropping knowledge of useless trivia, the ability to make her hair big, and a knack for breaking into song despite her family’s vehement protests. A full-time writer, registered nurse, wife, and mother living in the Great Northwest, Cecy enjoys spending time with her family and silencing the yappy characters in her head by telling their stories.

One thought on “Great Getaway with ONCE PURE by Cecy Robson”