We are so thrilled to share the cover of HART ATTACK with everyone today! HART ATTACK releases this November and Roman’s story is one you won’t want to miss!

Outside of Titan Group, there are few people that Roman Hart would die for. He’s a soldier, a protector, and he’s haunted that one of the people he should’ve been able to protect didn’t let him. That was years ago, and now a hardened heart and a cocky attitude are his impenetrable shields, until one woman—one challenge—drives him to distraction.

On the outside, Beth Tourne has it all. Luxury car, gorgeous condo, and a job partying with the rich and famous. It’s a plush CIA cover, but she wants more. Anything for an adrenaline rush that can override her guilty numbness and let her forget the tragedy she never saw coming.

Their scars make them perfect operatives. Their mirrored pasts give them deep, wounded reasons to stay alone. But the more they ignore the tension, the more vulnerable they become. Survival means trust. In one another, behind closed doors, and on the job. The only way they’re making it out alive is if they find peace while waging a war.

If you haven’t read SWEET GIRL by Cristin Harber, the new adult prequel to GARRISON’S CREED, you can grab it from iBooks HERE for free for a limited time! Sale price is also available on Amazon, B&N and Kobo!

Roman backed her against the wall, hands crawling up her arms, down her back. His body was too cut, too big. Too much to want to say no to. She arched into him, on him, her breaths far too stilted.

His fingers traced her jaw, his lips so close to hers. “You’ve changed your mind?”

No. Maybe. “Yes.” Thick air filled her lungs, rabid hunger made her lust drunk. The warmth of his almost-there kiss teased her without touching. “I changed my mind.”

He took a step back and bumped his fist against the wall over her shoulder as his head dropped back. “Fuck me.” He took a shaky breath in. “You’re drunk. I’m not. Let’s go before I become the asshole prick you think I am.”

She lives outside Washington, DC with her family and English Bulldog. 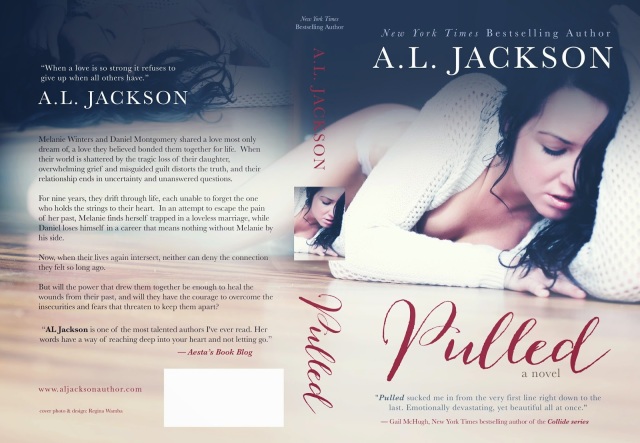 Melanie Winters and Daniel Montgomery shared a love most only
dream of, a love they believed bonded them together for life. When
their world is shattered by the tragic loss of their daughter, overwhelming
grief and misguided guilt distorts the truth, and their relationship ends in
uncertainty and unanswered questions.

For
nine years, they drift through life, each unable to forget the one who holds
the strings to their heart. In an attempt to escape the pain of her past,
Melanie finds herself trapped in a loveless marriage, while Daniel loses
himself in a career that means nothing without Melanie by his side.

Now,
when their lives again intersect, neither can deny the connection they felt so
long ago. But will the power that drew them together be enough to heal the
wounds from their past, and will they have the courage to overcome the
insecurities and fears that threaten to keep them apart?

Pulled
is a story of attraction and separation, of destiny and duty, of a love so
strong it refuses to give up even when all others have.

“Okay,
this one did it for me in a big way. I’m an angst-lover. And by that I mean,
I’m a Thoughtless, Beautiful Disaster, Love Unscripted, Slammed, Fifty Shades
of Everything, kind of reader. But there’s gotta be an HEA. And not a half-done
HEA but a real yeah-this-story-has-been-agonizing-but-look-it-was-all-worth-it
HEA. So, that said, I earnestly recommend this book. If you’re like me, you’ll
like this. Enjoy!” LitJunkie

A.L. Jackson is
the New York Times bestselling author of Take This Regret and Lost to You, as
well as other contemporary romance titles, including If Forever Comes, Pulled
and When We Collide, as well as the New Adult Romance Come To Me Quietly due
out January 7, 2014. She first found a
love for writing during her days as a young mother and college student. She
filled the journals she carried with short stories and poems used as an
emotional outlet for the difficulties and joys she found in day-to-day life.

Years later, she
shared a short story she’d been working on with her two closest friends and,
with their encouragement, this story became her first full length novel. A.L.
now spends her days writing in Southern Arizona where she lives with her
husband and three children. Her favorite pastime is spending time with the ones
she loves.