SYNOPSIS:
The
Rebel
Mya Washington is a rebel. Or at least,
that’s what her family has always said. As the youngest of a set of triplets,
she has always been the more rebellious of the three…even though she never
considered herself a rebel.
Outspoken? Yes.
Rule Breaker? Sometimes.
Trouble Maker? Nev—occasionally.
Growing tired of being typecast and
misunderstood, Mya moves to New York looking for a fresh start away from the
life she grew up in and out of the shadow of her older sisters.  Striking out on her own may have put a strain
on the family dynamic, but it’s the new beginning Mya was looking for.
But after the unexpected death of her
mother, she is blindsided yet again by a wedding invitation she didn’t see
coming. Her father’s upcoming marriage only cements the wall she’s put up
around her heart. Because if her father could be such an utter disappointment,
why should she even attempt to open up to any man?
Enter Colton Davis.
PURCHASE LINKS:
​​ 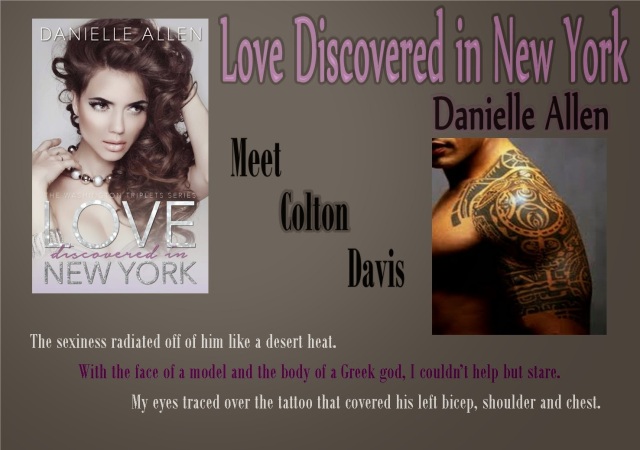 EXCERPT:
“What are you doing?” I asked breathily, licking my lips and
silently begging him to kiss me.
He didn’t answer at first. He looked at me predatorily before
leaning down to nibble on my neck. The feeling of his teeth lightly grazing my
skin while the threat of someone walking down the hallway and turning the
corner made me clench tightly. His fingers gripped my hips and desire washed
over me.  His hands caused goosebumps to erupt everywhere he
touched.  My body hummed from the electric currant that flowed
between us. The anticipation I felt for Colton’s kiss was almost unbearable.
“What are you doing?” I repeated, wrapping my arms around his
neck.
Leaning in so that our lips were almost touching, Colton answered
sexily, “You.” 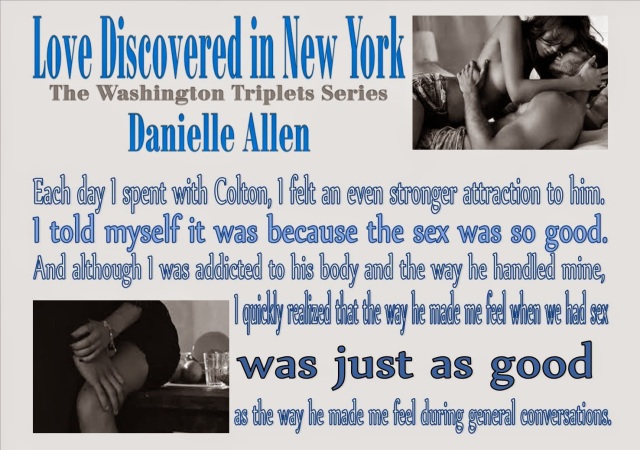 AUTHOR
BIO:
I
am a married event planner, life coach and instructor.  Between my awesome friends and family and my
amazing husband, I am constantly surrounded by love.  My goal at all times is to love what I’m doing
and enjoy life.  I love shopping and
football with equal fervor.  I’m an amateur
movie critic (i.e. my husband and I watch and critique a lot of movies for
fun). I love to read, but since I’ve been writing, I don’t read as much as I
used to. I love music. A good lyric with a good melody can paint a vivid
picture and invoke such a range of emotions. I have a soft spot for most
mediums of creative, artistic expression. But music is probably my favorite.
AUTHOR MEDIA LINKS:
Facebook.com/DanielleAllenAuthor
Goodreads.com/XOXO_DAllen
Twitter.com/XOXO_DAllen
Website: www.authordanielleallen.com
Amazon: http://www.amazon.com/Danielle-Allen/e/B00JT0JUZS/ref=sr_ntt_srch_lnk_4?qid=1407619585&sr=1-4
RELEASE LAUNCH HOSTED BY:

Today we have the release day for Stina Lindenblatt’s gorgeous Let Me Know. Read down to find out all the info on the book and release day launch!

Up All Night Book Addict

Ramblings From This Chick

I Dare You To Read

I Heart YA Books

Love In Every Page

Musings of the Book-a-holic Fairies, inc.

Crawling Over the Pages

A Life Bound By Books

Love Us Some Books

Under the Tiki Hut

This shouldn’t be happening again…

awaiting trial. But they return when her slam-dunk case starts to fall apart. Explicit letters she allegedly wrote surface, suggesting she was the mastermind behind her assault, a willing victim.

Amber only feels safe in the arms of her boyfriend Marcus, the one person she can lean on. Until damning evidence from Marcus’s past collides with the case and the media circus drags them both down. To protect Amber’s reputation, Marcus has only one option: end their relationship. He won’t risk further damage to her case, even if it means breaking her heart.

Amber has to find the strength to step into the spotlight and bring awareness to victims’ rights before she’s convicted in the court of public opinion. And she’s really not sure what’s worse—that her kidnapper could walk free, or that the seemingly endless attention and speculation will drive Marcus away permanently…

See how it all began for Amber and Marcus in Tell Me When. 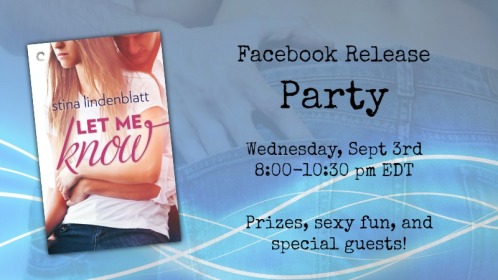 Join Stina at her Facebook Party for LET ME KNOW

Finland. She spent a semester in graduate school living in central Finland, and a summer during her undergrad degree working in Helsinki. She has a Master’s of Science degree in exercise physiology and has worked with elite athletes. In her free time, Stina is a photographer, mother of three adorable kids, and devoted wife. She currently lives in Calgary, Canada.

We are stoked to bring you all the Release Day Launch for K.A. Tucker’s IN HER WAKE! IN HER WAKE is a new adult contemporary romance and a prequel novella in the Ten Tiny Breaths Series, published by Atria Press (an imprint of Simon & Schuster).

That’s how I spot her.

There’s no doubt that it’s her; I’ve memorized her face.

Leaning against a wall on the opposite side, her lips wrapped around a clear bottle filled with clear liquor, her fiery red hair a wild mane against the stark white wall, a tight black T-shirt showing off toned arms. She’s in no rush to part with that bottle, guzzling back a good portion before she hands it off to someone, wiping her mouth with the back of her hand.

Her eyes at half-mast.

My heart starts racing. What the hell is Kacey Cleary doing here? By my calculation, she’s probably finishing her last year of high school, having lost at least half a year while recovering.

I tug my cap down even farther, though I doubt she can see two feet in front of her.

I don’t know that she was, though. I wonder if Kacey Cleary gives a fuck about anything anymore. Her Facebook account is inactive. She hasn’t posted a single word and the well-wishes have dwindled, as everyone moves on.

I do know that she shouldn’t be at a party in this state. I’ve heard of bad things happening when girls get that drunk. Especially when they don’t care.

But what do I do?

A blonde stumbles into my chest with two beers in hand. “Hey, do you go here? What’s your name?” She’s tipping her head back way farther than necessary to look up at me, telling me she’s trying to flirt but is too drunk to do it right.

I smile down at her anyway. She’s a good cover. I can stand right here and watch Kacey. “I’m Trent, and I used to go here.”

From the corner of my eye, I see Kacey shift from the wall and begin climbing the stairs, her arm hooked around the railing to help her. Two guys following her.

About IN HER WAKE:

Cole Reynolds had it all. And then one night he makes a bad choice… and loses everything.

When a drunken night out at a Michigan State college party results in the death of six people, Cole must come to terms with his part in the tragedy. Normally, he’d be able to lean on his best friends. The best friends that have been in his life since he could barely walk. Only, they’re gone. Worse, there’s the shattered body of a sixteen-year-old girl lying somewhere in a hospital bed, her entire life ripped from her because of a case of beer and a set of keys.

Everyone assures him that they know it wasn’t intentional and yet he can’t ignore the weight of their gazes, the whispers behind his back. The all-consuming guilt he feels every time he thinks of that girl who won’t so much as allow him near her hospital room to apologize. As the months go by and the shame and loneliness festers, Cole begins to lose his grip of what once was important-college, his girlfriend, his future. His life. It’s not until Cole hits rock-bottom that he can begin to see another way out of his personal hell: forgiveness.

And don’t miss the previous titles in the Ten Tiny Breaths Series!

Born in small-town Ontario, Kathleen published her first book at the age of six with the help of her elementary school librarian and a box of crayons. She is a voracious reader and the farthest thing from a genre-snob, loving everything from High Fantasy to Chick Lit. Kathleen currently resides in a quaint small town outside of Toronto with her husband, two beautiful girls, and an exhausting brood of four-legged creatures.