When Rochelle Ransom auditioned for the dating show Luring Love, she had big plans for winning the prize money to help her favorite charity–and if she won the hot bachelor’s heart, even better. But at the last minute she finds out the hot bachelor is her ex-boyfriend, Grant Drake. Desperate to keep her distance from him, she’ll do anything–and everything–to get voted off.
Years ago, Rochelle broke Grant’s heart, and he’s out for revenge. There’s no way he’ll vote her off.  After all, vengeance is a dish best served red-hot…and on live television.
When her hilarious antics to get kicked off the show escalate, Grant’s reminded why he fell in love with her the first time. Now he isn’t sure which might be more fun… Seeing how far Rochelle is willing to go to get away or how far he will to keep her forever.
BUY NOW
Amazon | B&N | Kobo | iTunes

Grant could practically feel the cameras focusing back on him. “I’ve decided to be America’s reporter for the day,” he said, having already memorized his lines. “So I have a few questions to ask that I think everyone will want to know—including me.” Their eyes locked. So did Rochelle’s jaw. Grant paused for effect. Then, “Why on earth would you choose to audition for a sleezy show like Luring Love?”

“I mean, have you really drained the dating pool already?” Grant continued, getting angrier with each word out of his mouth. These were, after all, valid questions. Never in a million years would Rochelle have chased after a man—so why the hell was she here? “What would your mother say? Coming on a show like this to paw at a man who’s already got nine other women doing the same thing?”

“Oh, are we going to talk about mothers, then?” Rochelle flung back her hair. “Instead of dating pools, let’s talk about gene pools—and the fact that you and your four siblings originated from separate ones!”

“Cut, cut, cut!” Chris had his hand on Grant’s shoulder, but Grant wouldn’t turn his eyes away from Rochelle. Her expression read Challenge Accepted.

Did she really just insult his mother’s…need for variety in life? He couldn’t let that low blow go unpunished. “Let’s do talk about gene pools and how we both know that cleavage of that particular magnitude doesn’t run in your family.”

Taken aback, Rochelle clutched at her shirt. Grant felt a win on the horizon, if hurling mother insults could, in fact, be considered winning at anything. “It’s a halter top, moron. It’s designed for cleavage. Besides, you didn’t seem to be complaining when I walked in!” she added.

His mouth fell slightly ajar. She noticed me noticing. Did the crew? Will America? “It doesn’t suit you,” he blurted.  A complete lie. It enhanced an already irresistible figure—so much so that he just might have been willing to change his general opinion on how much cleavage a woman should expose in public.  In fact, he suspected he’d change his view on world peace if Rochelle sat on his lap and asked him to.

“Really? Everything underneath suited the hell out of you before!”

“For God’s sake,” Chris said, standing in front of Grant to block his view of Rochelle. “Are we speaking the same language?” 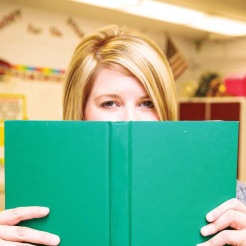 NYT Bestselling YA author of The Syrena Legacy series: OF POSEIDON (2012) OF TRITON (2013) OF NEPTUNE (2014). Repped by rockstar Lucy Carson of the Friedrich Agency. I live with my husband and
daughter in the Florida Panhandle. I have a southern accent compared to New Yorkers, and I enjoy food cooked with real fat. I can’t walk in high heels, but I’m very good at holding still in them. If you put chocolate in front of me, you must not have wanted it in the first place.