Friction (A Legal Affairs Novel) is available now! The latest release in the Legal Affairs Series, Friction is a standalone novel.

** Friction is being released by Montlake, which is an Amazon publishing company. As such, it will be sold exclusively at Amazon. Please note that you can purchase through Amazon and read on a free Kindle reading app on any smartphone or tablet. Click HERE to download the free Kindle app. **

At the powerhouse law firm of Knight & Payne, winning comes first and ethics a distant second. Leary Michaels uses her female charms to daze opponents, and it’s always worked well—until now. On her most personal case yet, she finds herself going up against a defense attorney just as skilled, shameless, and seductive as she is.

Reeve Holloway has never met a woman as sure of her own sexuality, or as ruthless in wielding it, as Leary is. But he won’t be toyed with. What Leary starts, he’ll finish—in the courtroom, the bedroom, or any-damn-place he wants. The sex is uninhibited, electrifying, and absolutely against the rules. Reeve’s job is to ruin Leary’s case…even if it destroys her in the process and costs him the woman he’s come to love. 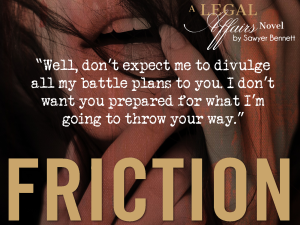