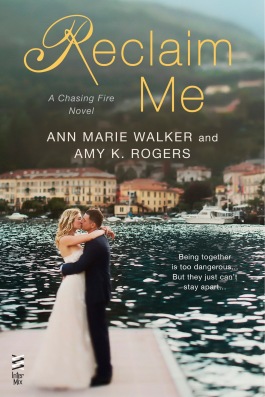 As the heart-pounding Chasing Fire trilogy concludes, a dangerous entanglement leaves Hudson and Allie wondering how much they’re willing to risk for the love they can’t live without…
There’s almost nothing Alessandra Sinclair wouldn’t do for Hudson Chase. He was her first love, and she’s determined that he’ll be her last. But when the terrible truth Hudson has been hiding comes to light, Allie finds herself caught in a deadly game of cat and mouse with a man from her past who’s determined to use what he knows to ruin Hudson. Now, the only way to save the man she loves may
be to lose him forever…
Hudson has always known that the secrets he keeps could be his downfall, but he never expected them to put Allie’s life in danger as well. It’s time for him to come clean–before everything he’s ever wanted is destroyed…
Includes previews of REMIND ME and RELEASE ME, the first two books of the Chasing Fire trilogy.

Allie bent to tuck her phone into the carry-on stowed beneath the seat in front of her. A shiver of awareness swept over her skin and she stilled. Hudson. She felt his presence just as surely as if he’d touched her. But despite the brief moment she took to prepare herself, the sight of him still took her breath away. He was standing in the aisle, the muscles of his chest and arms flexing as he shrugged out of his wool coat and handed it to the flight attendant. His hair was damp, no doubt from the snow falling outside, and when he reached up to run his hand through the unruly mane, his sweater rode up, affording her a glimpse of his honed washboard abs and the trail of dark hair that disappeared beneath his belt.

He glanced down and caught her staring. “See something you like?”

She ignored his obvious innuendo, choosing instead to address the much bigger issue. “What are you doing here?”

“Going after what’s mine.”

Praise for the Chasing Fire trilogy 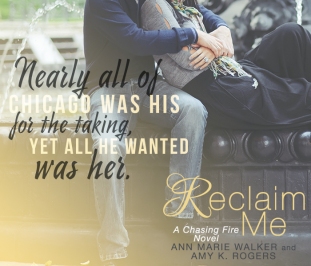 Reclaim Me is the final in the Chasing Fire trilogy.  I couldn’t wait to read more Allie and Hudson.  Walker and Rogers has us picking up their story right where we were left at the end of Release Me.

The heat and attraction are great and with this third book unsurprising.  What I loved most was seeing character growth over the trilogy.  We get that with Allie’s actions.  Walker and Rogers provide enough mystery that keep you wondering.  We know Allie and Hudson belong together but their journey to get there makes for some unstoppable reading.

I thoroughly enjoyed the Chasing Fire trilogy and am a little sad to see the end.  I’ll definitely be on the lookout for more to read from Anne Marie Walker and Amy K Rogers. 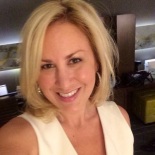