Omar Esterly is married to his job. But when Omar sets his sights on a potential, family-oriented client, his confirmed bachelorhood becomes a problem. Fortunately, his friend and employee, Devi Boss, has the perfect plan…
Okay, so it wasn’t exactly Devi’s plan to become her friend’s fake fiancée. Lies aren’t her style. However, Omar offers her a big, beautiful raise—enough to track down the missing father she’s never known—and Devi reluctantly agrees to the whole engagement hoax…
This was supposed to be a no-strings-attached win-win for both Devi and Omar, but when they cross the line between friendship and…well, something more, Devi realizes she’s made a huge mistake that just might cost her both job and friend—falling for her fiancé.
ONLY $0.99
Amazon | B & N | iBooks | Kobo 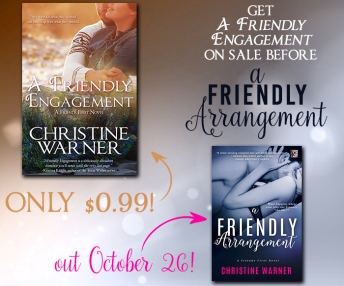 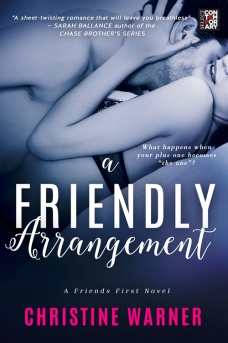 What happens when your plus one becomes “the one”?

Holly Haggerty and Roth Esterly are two besties with everything in common—they’re neighbors, career-driven, and commitment-phobes. Tired of always being set up on dates by well-meaning friends and family, they take matters into their own hands: they will be the other’s plus one—a little friendly arrangement between friends.

Easy…until a steamy night where they cross the line. But that’s okay, they’ll add an addendum—one that includes a little action between the sheets…on top of the sheets…and without the sheets. But there are rules. Dating and sex are exclusive until one of them decides to terminate the agreement. No slumber parties. And if either party becomes emotionally involved they will break things off with no hard feelings.

When unexpected news changes their plans and turns their fun arrangement into something more serious, Holly and Roth must come to terms with what’s more important—what they thought they wanted, or what they really need.

Christine Warner is living her dream in Michigan along with her family, one laptop, and a much loved assortment of furry friends.
Besides laughing and a good dose of humor, she enjoys spending time with her family, cooking, reading, writing, but no arithmetic. A confessed people watcher, she finds inspiration for her stories in everyday
activities. She loves to read and write about strong heroes, and determined, sometimes sassy, heroines.
A girl gone wild, at least where social media is concerned, she enjoys meeting other avid readers and writers on facebook, twitter and her website at christine-warner.com
Website | Facebook | Twitter | GoodReads

One thought on “Sale Blitz – A FRIENDLY ENGAGEMENT by Christine Warner”