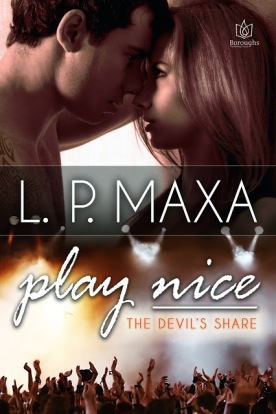 BLURB:
Rock a stadium. Bang a chick. Repeat. As lead singer of The Devil’s Share, Dash Conner could get anything or anyone he wanted—until he met Lexi Grant.
SYNOPSIS:
MONEY.  FAME. WHISKEY. SEX.
For Dash Conner, lead singer of The Devil’s Share, everything he wanted was his for the asking. Whiskey. Drugs. Money. Sex. But not Lexi Grant. For the first time since he picked up a guitar, a girl was actually demanding he woo her. For a chance with her, Dash would do that and more.
Lexi Grant was no groupie. Just because the biggest rock star in the world smiled at her didn’t mean she had to fall into bed with him—but it was going to be awfully hard to resist that impish smile and those tatted abs. Surely one night of fun wouldn’t hurt anyone.
Unless that night ends with a broken condom.
For Lexi and Dash, that’s just the beginning. Add an overly affectionate pit bull, a missing guitarist, a house full of sorority girls, a junkie ex-bandmate and an extreme aversion to Jäger, and it’s either a recipe for disaster or true love. 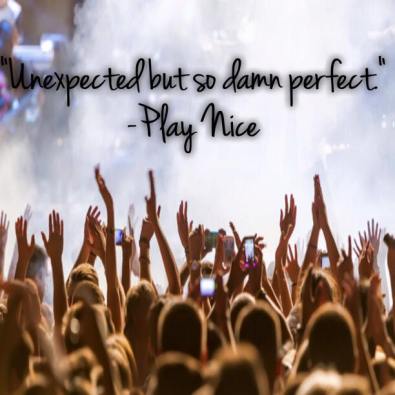 Excerpt:
Amy elbowed me in the ribs, “Uh, Lex? Dash is staring at you.”
In order to keep myself from ogling him, I’d taken up counting the number of topless women in the crowd. FYI: I got to twenty without even having to search that hard. I looked back in Dash’s direction. Yep, he was staring. I smiled. I couldn’t help it. He smiled back. His smile was one of those panty-dropping megawatt smiles—the kind that makes you feel like you are the only person in the world that could elicit that particular smile, even though you know logically many a girl have been lured in with it.
Dash kept his eyes on mine, but spoke into his microphone.  “Uh, guys? There is a sexy brunette standing over here to my right. Does she belong to one of y’all? Please tell me she doesn’t.” He winked at me again. Amy had a death grip on my arm.
Luke stood up and peered over his drums trying to see into the shadows to where we were standing. “Is she standing next to a blonde chick with big blue eyes that’s drooling even though she’s clearly wearing a wedding ring?” The crowd laughed and so did Amy.
Dash chuckled, “As a matter of fact, yes she is.”
Luke nodded and sat back down. “That’s my friend Lexi.”
Dash’s smile grew. “Well isn’t that just the best thing I’ve heard all night. So, Lexi…are you enjoying the show?”
I couldn’t help but laugh at this situation. A rock god was flirting with me over the sound system in a sold-out stadium. I nodded my head yes.
“Good. Can I get you anything? This is officially our first date by the way.”
I bit down on my lip, contemplating how to play this. I could laugh him off and say no…or…I could have the time of my life with a rock star. I tipped my hand back towards my mouth, indicating I wanted a drink.
“Could someone please get my girl a drink?” Dash turned back towards the crowd. “Sorry about that folks but I’ve been staring at her since the show started.” He led into the next song; the crowd sang every word right along with him.
Some guy walked over and handed each of us a beer. Amy turned to me. “Holy shit, Lex. You have to do him. You have to. On behalf of every married woman out there, you have to sleep with Dash Conner.”
“On behalf of every married woman, Ams? Or on behalf of you?” I took a long pull of my beer. Amy married her college sweetheart and even though she was in fact drooling, they were deliriously happy together.
“Come on, Lexi. One night with a sexy rock god. Who turns that down?”
“I do. I’m too old for one night stands, rock god or not.”

L.P. Maxa’s Play Nice is the first in her The Devil’s Share series.  I loved the instant attraction between Dash and Lexi.  Their chemistry was hot.  But it really is the cast of characters that made Play Nice such a fun read.  I loved the guys and know that I was smiling more than once while enjoying their banter.
I’m not sure what I expected but I thoroughly enjoyed being along for the ride on this rock tour.  I cannot wait to read more in this series.  I wonder who’s book is next… 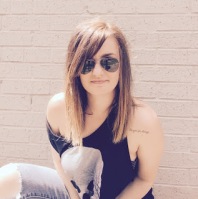 AUTHOR BIO:
L.P. Maxa lives in Austin Texas with her husband, daughter, 3 rescue dogs, 1 stray cat, and 1 fish that keeps dying that she keeps replacing so her toddler doesn’t notice. She loves reading Romance novels as much as she loves writing them.  L.P. says that inspiration can come from anywhere; a song lyric, a quote, a weekend with friends. The tiniest things spark amazing stories.
SOCIAL MEDIA:
Website/Blog  http://lpmaxa.wordpress.com
Instagram   @lpm0118
Facebook   LP Maxa
Twitter       @leigh0118