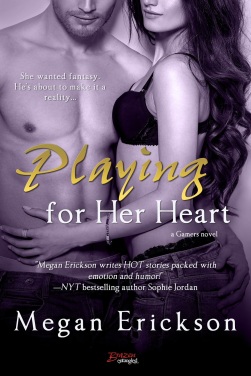 GrantOsprey just had the hottest sex of his life. Sure, they were both in costume, and yes, it was anonymous, but he never expected her to bolt in the middle of the night without so much as a good bye, let alone exchanging numbers. Or names. All he’s left with are her panties and some seriously X-rated
memories…until he meets his business partner’s little sister.
Only Chloe Talley isn’t the bold, sexy vixen he remembers. And she wants nothing to do with him.
Cosplay is Chloe’s only chance to leave her boring, socially awkward world behind. To forget that she’s failing at life and can’t be with anyone, let alone a single-father like Grant. But the raw hunger between them is undeniable. With him, she can be a misbehaving maid. A sexy call girl for hire. Each scene
pushes Chloe beyond her strict boundaries, until Grant demands the one character she can’t play.
Herself.
BUY NOW
Amazon | B & N | iTunes | Kobo | GooglePlay 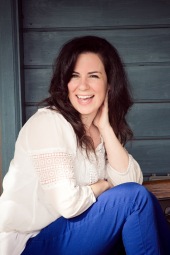 Megan worked as a journalist covering real-life dramas before she decided she liked writing her own endings better and switched to fiction.
She lives in Pennsylvania with her husband, two kids and two cats. When she’s not tapping away on her laptop, she’s probably listening to the characters in her head who won’t stop talking.
Website | Facebook | Twitter | GoodReads
Looking for More of the Gamers Series?

It hit me like a ton of bricks. So heavy and hard it almost took me to my knees. Roark had been going after the thing that mattered most to me from the very beginning. I cared about the people that still had a shot to make it out of the Point. I fought for the innocent and the young because I often felt like no one else was going to. Every person that Roark had hurt, had twisted, had infected in his quest to exact his revenge had been someone I’d sworn I would protect and keep safe.

It started with the kid whose neck he snapped and ditched outside of the Pit. Just some dumb jock barely in his twenties that liked to gamble, but he was just a kid and deserved a better end. Then it was the club. Before it burned to the ground, Nassir had been deliberately lured away and all the victims were just kids out looking for some trouble and fun. They lost their lives doing what kids all across the country did every single day. After that it was the girl on the dock and the armed stripper at Spanky’s. Two girls too young to be caught up in that kind of life and too young to be dead. Two girls I should’ve been able to keep safe. And lastly there was my brother. Sure, Bax was far from innocent, far from having a shot at a good and law-abiding life, but he was still my only family, my blood, and even if I had let him down in the past, I took my duty to keep him safe and keep him out of trouble to heart now. Killing Bax would have served the dual purpose of exacting revenge on the man who Roark thought was responsible for his father’s death and rubbing salt into the wound I would suffer for being unable to protect him.

The realization of how insidious and malicious as well as how fucking brilliant in his evil machinations Roark was had me shaking so hard I almost missed Brysen’s words as she whispered “Someone needs to stop him; he can’t be allowed to go after anyone anymore.”

I blew out a breath and tried to steady myself. “I’m trying.”

No wonder Race was sprung on her. She looked like a doll but had the bite of a barracuda. She was his perfect match in that way—all golden and glossy on the outside but made of stronger, more resilient stuff on the inside. If Roark did have Karsen, I sure hoped the younger Carter was as tough as Brysen.

Just as the big, black utility vehicles with SWAT team members and the bomb technicians rolled up to the scene, the metal front doors at the front of the school clanked open and Booker came striding through with his arm wrapped around an obviously shaken and upset Karsen. The teen looked so tiny and fragile next to the giant man that it had murderous rage toward Roark thumping heavy not just through my heart but the heart of the beast that was wide awake in my chest and hungry for retribution.

Brysen let out a squeal and took off running toward the duo. I should’ve stopped her considering the building still wasn’t secure and I still had no idea where Roark was lurking, but I didn’t have the heart to keep her away from her sister. The two blondes hugged and then they were both crying as Booker was ripped away from the teen and slapped into cuffs by the same cop he has shoved over only moments before.

Karsen started yelling when the cop started to haul Booker away, but Brysen shushed her and guided her over to where I was still standing. I watched curiously as the guys dressed in black tactical gear unloaded a robot that looked like something from Star Wars and used a computer to guide it toward the front of the school. I was dying to know if they were going to find anything or if this had all been some elaborate ruse Roark had staged only to show me he had me right where he wanted me.

“Are you okay?” The teenager was crying big, fat, silent tears but she looked unharmed. She nodded and looked in the direction where the cops had taken Booker.

“Why is he getting arrested? He was the only one that came and looked for me.” Ouch. That accusation burned hot across my skin.

“He pushed a cop. They tend to take offense at that. Why were you still inside the building, Karsen? What happened?” I didn’t want to press her too hard because she was obviously pretty shaken up but I didn’t have any time to waste either.

In New York Times and USA Today bestselling author Jay Crownover’s third novel in her sexy, thrilling Welcome to the Point series, a woman’s search for repentance leads her to the one man from her past she can’t forget as they join forces to save their city—and the explosive love neither can live without.

Titus King sees the world in black and white. Right and wrong. Which is why as a teenager he left behind the only family he’d ever known to make a better life for himself. Now a police detective in one of the worst cities in the country, he can’t deny his life has turned into a million different shades of gray.

The new criminal element in The Point has brought vengeance and destruction right to Titus’s front door, and the difference between right and wrong is nothing compared to keeping those he loves alive. To add to his already strained moral compass, the beautiful and mysterious Reeve Black has made her way back to town, and she might be as dangerous to Titus as the guy trying to destroy the Point because he needs her—in more ways than one.

Reeve knows all about how ruthless this new threat to destroy The Point can be… and instead of running away, she wants to help. She has a lot to repent for and saving the city, plus the hot cop that she hasn’t been able to forget might just be the only way she can finally find some inner peace.

With an entire city poised on the brink of war, Titus and Reeve stand in the crossfire—and it will take two brave souls to fight for the ultimate love.

And don’t miss the previous books in The Point Series!

Jay Crownover is the New York Times and USA Today bestselling author of the Marked Men and The Point series. Like her characters, she is a big fan of tattoos. She loves music and wishes she could be a rock star, but since she has no aptitude for singing or instrument playing, she’ll settle for writing stories with interesting characters that make the reader feel something. She lives in Colorado with her three dogs. 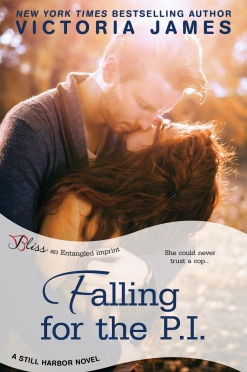 Teacher Kate Abbott’s fresh start in Still Harbor was the beginning of the life that she and her two best friends always imagined for themselves. Still, being a working single parent of a special needs daughter hasn’t exactly improved Kate’s love life. But Kate’s preference for nachos over men quickly disappears
when she meets the oh-so-sexy Matt Lane.
Until she finds out he’s a cop.
Matt is a former cop-turned-private investigator, and he knows fear when he sees it.  A cop clearly spooked Kate…or hurt her. Still, something about the gorgeous professor catches his attention, and despite his “no settling down” policy, he can’t resist her. But all of the attraction in the world won’t be enough to overcome Kate’s past…
BUY NOW
Amazon | B&N | iBooks | Kobo

Victoria James is a New York Times and USA Today bestselling author of contemporary romance.Victoria always knew she wanted to be a writer and in grade five, she penned her first story, bound it (with staples and a cardboard cover) and did all the illustrations herself. Luckily, this book will never see the light of day again.

In high school she fell in love with historical romance and then contemporary romance. After graduating University with an English Literature degree, Victoria pursued a degree in Interior Design and then opened her own business.  After her first child, Victoria knew it was time to fulfill her dream of
writing romantic fiction.

Victoria is a hopeless romantic who is living her dream, penning happily-ever-after’s for her characters in between managing kids and the family business. Writing on a laptop in the middle of the country in a rambling old Victorian house would be ideal, but she’s quite content living in suburbia with her husband, their two young children, and very bad cat.

Sign up for Victoria’s Newsletter to stay up to date on upcoming releases and exclusive giveaways, follow her blog for daily antics and insight into her daily life, and get to know her on twitter and Facebook. She loves hearing from readers!