The first three books in the New York Times bestselling Ghost-in-Law series  by Jana DeLeon are now on sale for only $.99. (Regular price $7.99)

Scientist Maryse Robicheaux thought that a lot of her problems had gone away with her mother-in-law’s death. The woman was rude, pushy, manipulative and used her considerable wealth to run herd over the entire town of Mudbug, Louisiana. Read more

Sabine LaVeche needs to locate a blood relative fast – her life depends on it. When Helena Henry shows up offering help, Sabine knows she’s really in for trouble when it’s the best idea she’s heard in a while. Read more

Who killed Helena Henry? The shorter list may be who didn’t want her dead.

Psychic Raissa Bordeaux thought she’d left her former life behind, but when a child is kidnapped, she risks her secret identity by offering the police help with the case. Read more 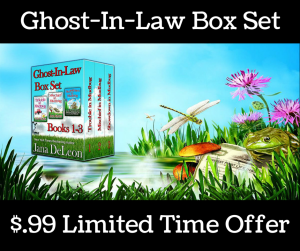