If you love the MMA romances of Vi Kreeland and Kendall Ryan, Sidney Halston’s
Worth the Fight series will knock your socks off! In Fighting Dirty, a geek-chic cage fighter proves that appearances can be deceiving . . . and oh-so-tempting.
With his preppy clothes and horn-rimmed glasses, Enzo Silva is the last dude anyone expects to find in a mixed martial arts gym. A wealthy Brazilian banker who never had to fight for anything, Enzo’s stuck in the amateur circuit—but he burns to make the pros. Maybe that explains the heat he feels whenever he’s
around Jamie Lynn Calhoun. The pint-size, magenta-haired bartender with the Texas drawl is everything he’s not . . . and everything he craves.
Tough as nails and independent to a fault, Jamie Lynn—JL to her friends—works hard to pay her bills and keep life simple. Enzo is doing his best to complicate that.  Even though she likes to bust his balls, he’s got some kind of a nerdy-hot vibe that makes JL wonder if she might finally be able to let her guard down. It might do the boy some good to spend some time in her world, where blood, sweat,
and victory are as sweet as the first taste of real love.
BUY NOW
Amazon | B & N | Google Play | iTunes | Kobo

Sidney Halston lives her life by one simple rule: “Just do it.” And that’s exactly what she did. At the age of thirty, having never written anything other than a legal brief, she picked up a pen for the first time to pursue her dream of becoming an author. That first stroke sealed the deal, and she fell in love with writing. Halston lives in South Florida with her husband and children.
Facebook | Twitter | Website | GoodReads

Today we have the release day launch of Skip to the Good Part Vol 3!! I love the these sexy collections and I’m so happy to bring you this one! Be sure to check out all the fantastic authors in this collection, and grab your copy while it’s on sale!!

MrsLeif’s Two Fangs About It

A Life Bound By Books

Three Girls and A Book Obsession

Reading and Writing Between the Wines Blog

Reading Is My Superpower

My One True Obsession

we stole your book boyfriend

Reading Between the Wines Book Club

Books to Light Your Fire

I Dare You To Read

Romance and Fantasy for Cosmopolitan Girls

Expressions of a Hopeful Romantic

Find your next red-hot read in this sizzling collection of sexy scenes. Volume Three offers even more great reads—preorder now for just 99¢

Skip to the Good Part 3: 20 Authors Reveal Their Steamiest Scenes offers face-fanning romance and tie-me-up sizzle (and everything in between) from top authors including New York Times and USA Today bestsellers.

This collection features an adventurous woman who finally fulfills her fantasy of being with three men, a married couple who spice up their sex life by going to a swinger’s club, a virgin who auctions off her virginity to the highest bidder, a cowboy who falls in lust with the daughter of his family’s arch nemesis, and a vacationing woman who falls in bed with a sexy celebrity.

Due to the graphic nature of some content, this collection is recommended strictly for mature readers. 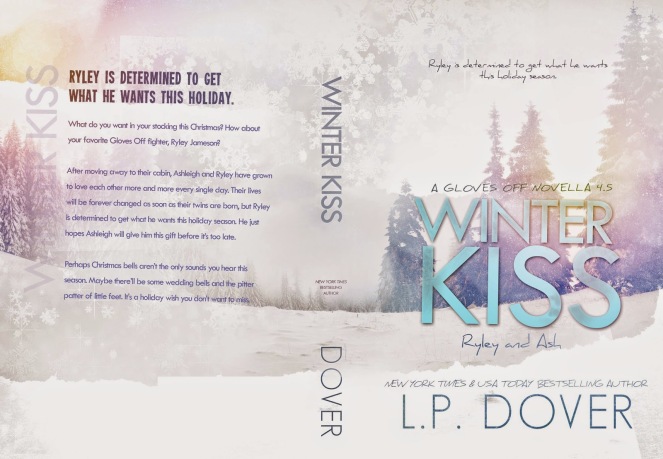 What do you want in your stocking this Christmas? How about your favorite Gloves Off fighter, Ryley Jameson?

After moving away to their cabin, Ashleigh and Ryley have grown to love each other more and more every single day. Their lives will be forever changed as soon as their twins are born, but Ryley is determined to get what he wants this holiday season. He just hopes Ashleigh will give him this gift before it’s too late.

Perhaps Christmas bells aren’t the only sounds you hear this season. Maybe there’ll be some wedding bells and the pitter patter of little feet. It’s a holiday wish you don’t want to miss.

He took off his gloves and brushed his fingers down my cheek. I was surprised they felt so warm after being out in the cold for the past hour. “Let’s go inside before you freeze out here.”

Grabbing my hand, he led me inside and shut the door. I stood there staring at him, my breaths coming out in pants while I waited on him to take off his jacket and boots. “Ryley, you’re freaking me out. What’s wrong?”

Taking a deep breath, he let it out and slowly turned my way. He was nervous. But what could he possibly be nervous about? He grasped my hands and pulled me over to the couch. When we sat down, he lowered his gaze to my hand, the one I wore my engagement ring on.

“I will never forget the day you told me you would marry me,” he said.

“Neither will I.” The memories flooded my mind. It was a cool, brisk autumn day out in our meadow. We had just made love on the grass when he slipped the ring on my finger without me realizing it. It was a good day. “But I want you to tell me what has you looking so lost. I thought everything was good this morning when you left.”

“Believe me, angel. Things are better than good. I’ve just been doing some thinking and I wanted to talk to you.” He looked down at my ring again and twirled it around my finger. “I gave you this ring because I love you, and because I can’t imagine spending the rest of my life without you by my side.”

I squeezed his hand and moved closer. “I feel the same way. I’m more than ready for next October to get here so we can get married.”

Releasing a heavy sigh, he lifted his blue eyes to mine. There was no trace of my playful Ryley, he was nothing but serious. “I don’t want to wait until October.”

READ FROM THE BEGINNING:

Two is always better than one.

What would you do if you were given the chance to spend the night with not one, but two
fighters? Would you do it? Could you open yourself up to the pleasures they
offered and do exactly what they said in order to pass on to the next round?
It was common knowledge that Ryley and Camden Jameson, well-known MMA fighters and identical
twins, were just as aggressive and passionate in the bed as they were in the
ring. The only problem was that if you didn’t pass their test on the first
night, then you didn’t proceed to the next round. They loved a good fight, and
that’s what they got when they met Ashleigh Warren.
Ashleigh knew what was going to happen when the twins approached her with a proposition, and
needless to say, she knew exactly how to handle them … or so she thought. The
rules had changed, and in order to get them both she had to first spend one
night with each and last until they were done with her. It was a proposition she
couldn’t refuse, but she knew it wouldn’t be easy to win. However, it was one
that she was going to enjoy.

UFC Middleweight fighter, Ryley Jameson, swore it would never happen again. He was done with his ex, and over the pain she’d inflicted when she left him. At least, that’s what he tells people. Maybe if he says it enough, he’ll begin to believe it himself.

Regretting her decision to let Ryley go, Ashleigh Warren comes back into town and confronts him. Holding only one secret back, she puts the rest on the line and asks for a second chance. Too bad he’s not going to let her off easy.

Camden Jameson loves his twin brother, but his jealousy runs deep. They may be identical in looks, but that’s where the similarities end. When Ashleigh comes back into Ryley’s life, Camden has the perfect opportunity for revenge. Two birds, one stone.

A journey to the Dark Side affects them all, but only one feels the true sting of revenge.

USA Today Bestselling author, L.P. Dover, is a southern belle residing in North Carolina along with her husband and two beautiful girls. Before she even began her literary journey she worked in Periodontics enjoying the wonderment of dental surgeries. Not only does she love to write, but she loves to play tennis, go on mountain hikes, white water rafting, and you can’t forget the passion for singing. Her two number one fans expect a concert each and every night before bedtime and those songs usually consist of Christmas carols.