Maybe the best way for two broken people to find true love is to jump headfirst into the deep end of desire.

USA Today bestselling author, Stacey Kennedy, returns to the passion-filled world of Club Sin and Dirty Little Secrets with this new novella featuring a slightly flawed Dom who has seven days–and seven very steamy nights–on a Caribbean cruise to convince a way-too-innocent woman from his past that maybe the best way for two broken people to find true love is to jump headfirst into the deep end of desire.

Liv Sloane needs a vacation. After her cheating ex broke her heart–and their engagement–Liv never fully recovered. In fact, she’s spent the past two years avoiding romance at all costs… with the exception of that sizzling one-night stand she can’t seem to forget. So when her friends from college suggest a reunion cruise, Liv knows a relaxing week of sun, sand, and beach reads is exactly what she needs to clear her mind. But when they board the ship, Liv is hit with two surprises. Her friends accidentally booked a singles cruise, and her one-night stand is waiting on deck.

Miles Schantz has spent the past six months thinking about Liv. As a Dom at one of the hottest sex clubs in Las Vegas, Miles has his pick of women… so why can’t he get Liv out of his head? When he receives an email asking him to join Liv on a cruise, he can’t believe his luck. But when he meets her on board–and she’s completely unaware of her “invitation”– Miles has to come up with a new plan. Six nights of no-strings-attached passion. Six nights of wild fantasies, sexy games, and forbidden adventures. Six nights to show Liv that she belongs with him… 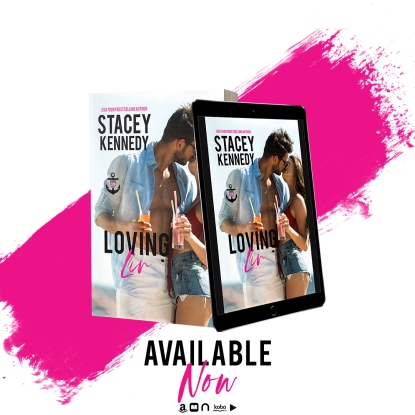 Stacey Kennedy is a USA Today bestselling author who writes contemporary romances full of heat, heart, and happily ever afters. With over 50 titles published, her books have hit Amazon, B&N, and Apple Books bestseller lists.

Stacey lives with her husband and two children in southwestern Ontario—in a city that’s just as charming as any of the small towns she creates. Most days, you’ll find her enjoying the outdoors with her family or venturing into the forest with her horse, Priya. Stacey’s just as happy curled up indoors, where she writes surrounded by her lazy dogs. She believes that sexy books about hot cowboys or alpha heroes can fix any bad day. But wine and chocolate help too.

Stacey Kennedy may already be one of my auto-buy authors but if she wasn’t already, after reading Loving Liv, she’d be on my list.  While enjoying the Gone Wild series, the final book in the series, Loving Liv, is my favorite.  I loved Liv and Miles so much!  Their chemistry is irresistible.  SK’s series contribution was very fitting with the series title,Gone Wild.  Loving Liv is a fun and sexy romance that will have you wanting to catch up on SK’s Club Sin series and Dirty Little Secrets series.