Insta-love only happens in the movies.
Insta-lust? That she’d buy into.

Insta-love only happens in the movies.
Insta-lust? That she’d buy into.

Until she meets take-charge club owner Landon Bennett and falls head over heels at a glance.

When hot as sin Landon Bennet offers sexy songstress Vivienne Clark a summer residency at his popular Manhattan nightclub, it’s the opportunity of a lifetime and she can’t resist. Add in the man’s obvious interest and seductive attention and life is perfect. Until she puts together the pieces of his past. Fate might have brought them together, but is the intimate relationship they’ve been building strong enough to overcome one painful fact. She’s the sister of the man who killed his twin.

“So this is the bedroom,” she said, looking around the immaculate space.

“Yes, it is. Feel free to put your own touches on it for as long as you’re here.”The decorator had pulled together an apartment for three single men.

She treated him to a generous smile. “Thank you.”

Knowing he’d be tempting himself and not caring, he stepped closer until her feminine fragrance filled his nostrils. They stared at each other for a long, charged moment, desire he couldn’t escape building inside him.

She met his gaze and her lips parted. It wasn’t an invitation, but her eyes still held his, and she wasn’t backing away either.

He slid his hand behind her neck, cupping her soft skin. “I know I’m your boss, so no pressure,” he said as he applied a bit to her skin. “But I want to kiss you.”

She paused. Looked up at him. Then rose onto her toes. His mouth met hers. Warm and willing, her soft lips glided against his and his entire body came alive. He tightened his grip on her neck as he slid his tongue into her waiting mouth. She tasted sweet and he deepened the kiss, wanting more of her. With a moan, her body leaned against his, her breasts pressing against his chest.

Their tongues meshed and mingled. Their harsh breathing filled the room. The kiss went on and he was in no rush to end the moment. But suddenly she gasped and pulled away.

“We shouldn’t,” she said, brushing her damp lips with her hand.

She swallowed hard. “I just … I need to focus on my work,” she said, turning away so he couldn’t see her face.

He narrowed his gaze, wondering if something more was at play. A woman didn’t kiss him like she did, then back off that easily. But he also wasn’t going to push her. He’d see how things between them played out during her time here and take his cues from her. Which didn’t mean he wouldn’t play up the charm and test her resolve.

“I think the apartment will work out well.” She headed for the door.

“Do you need help moving in?”

“I’ve got it but thank you,” she said in a strained voice.

“Well, Ellie. Owen wouldn’t get his hands dirty moving my clothing over. It’s fine. We’ve got it. She’s borrowing her parents’ car.”

He rolled his eyes. “I’ll be over at eight a.m. tomorrow and we’ll get you moved in.

”He wasn’t going to leave the two women to drag all her things alone back and forth up to the apartment.

He grinned. “I’ve got partners, don’t I? All you need to worry about is packing your things up. We’ll handle the rest.”

He placed a finger to her lips, and damned if her eyes didn’t darken with desire. She might be focused on her career, but she was interested in him as well. 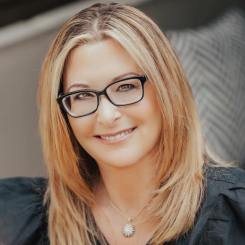 New York Times, Wall Street Journal, and USA Today Bestseller, Carly Phillips gives her readers Alphalicious heroes to swoon for and romance to set your heart on fire. She married her college sweetheart and lives in Purchase, NY along with her three crazy dogs: two wheaten terriers and a mutant Havanese, who are featured on her Facebook and Instagram. The author of 50 romance novels, she has raised two incredible daughters who put up with having a mom as a full time writer. Carly’s book, The Bachelor, was chosen by Kelly Ripa as a romance club pick and was the first romance on a nationally televised bookclub. Carly loves social media and interacting with her readers. Want to keep up with Carly? Sign up for her newsletter and receive TWO FREE books at www.carlyphillips.com.

Better than Sexy is the third in Carly Phillips’ Sexy series. I enjoyed the latest CP read. I like picking up a CP romance, knowing that I’ll enjoy the characters, the chemistry, and sometimes that extra bit of something. Vivienne and Landon have an attraction that is undeniable but also a linked past that might just keep them apart. I did enjoy Landon and Vivi very much and was rooting for their HEA.