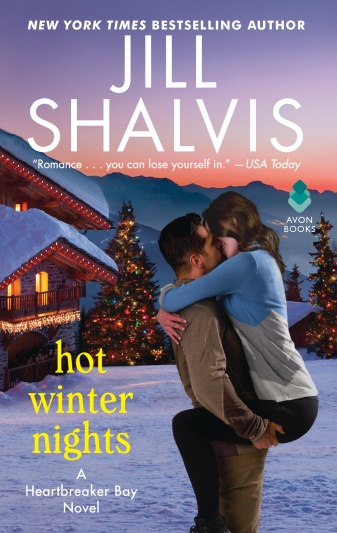 Hot Winter Nights, a stand-alone Heartbreaker Bay romance, by Jill Shalvis is a sexy romance in which hero Lucas Knight wakes up with a woman in his bed with no memory of how that happened. What the heck?

Most people wouldn’t think of a bad Santa case as the perfect Christmas gift. Then again, Molly Malone, office manager at Hunt Investigations, isn’t most people, and she could really use a distraction from the fantasies she’s been having since spending the night with her very secret crush, Lucas Knight. Nothing happened, not that Lucas knows that—but Molly just wants to enjoy being a little naughty for once . . .

Whiskey and pain meds for almost-healed bullet wounds don’t mix. Lucas needs to remember that next time he’s shot on the job, which may be sooner rather than later if Molly’s brother, Joe, finds out about them. Lucas can’t believe he’s drawing a blank on his (supposedly) passionate tryst with Molly, who’s the hottest, smartest, strongest woman he’s ever known. Strong enough to kick his butt if she discovers he’s been assigned to babysit her on her first case. And hot enough to melt his cold heart this Christmas. 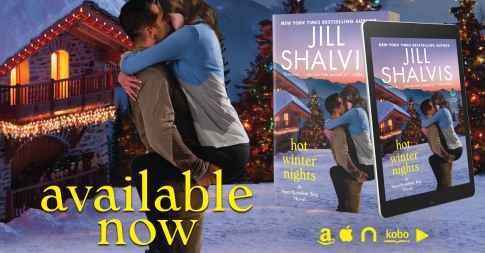 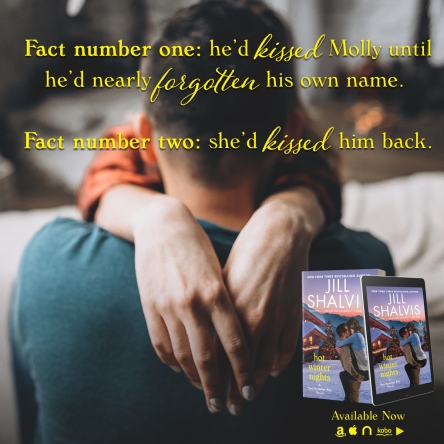 “You’re staring at me funny,” he said.

Probably because she was confused over how badly she wanted him. Okay, not so suddenly, but still, denial had been her friend and now that friend had deserted her. “No, I’m not.”

She turned her back on him and grimaced to herself, knowing exactly how she’d been staring at him. “Like I’m annoyed by your presence?” she asked.

“So you keep saying.”

His voice sounded right in her ear now. He’d moved, shifting close enough that his chest nearly brushed the entire length of her spine. She could feel the heat of him and nearly moaned. Nearly. But she caught herself. It was just that his body heat was soaking into her and she found herself wanting to back into him. He smelled amazing and he was still dressed from his job, and that was a shocking turn on too. As was the sexy smirk she heard in his voice.

Which didn’t make any sense. From the time she’d come into her sexuality as a teenager, complete with all the baggage of her kidnapping still hanging over her head, she’d only ever felt comfortable when she was the one doing the charming and chasing. She’d dated guys here and there, all very different from her brother and men like Lucas. They’d been … beta. Not pushovers, but non-threatening. Nice and sweet. Emotionally available.

The exact opposite of Lucas.

But the truth was, no one had ever really invested in her, and she wasn’t sure Lucas was the investing type either. In fact, she was fairly positive he wasn’t, but it still felt a little bit like he was chasing her and she wasn’t at all certain what to do with that.

Jill lives with her family in a small town in the Sierras full of quirky characters (Any resemblance to the quirky characters in her books is mostly coincidental). She does most of her writing on her deck surrounded by more animals than humans. Which is quite astonishing considering she’s a city girl who was plucked from the wilds of L.A. to the wilds of the Sierra’s. Most of her books come from a combination of hard work, cookies, and hot guy pics, and not necessarily in that order.

Jill often travels to reader weekends & conventions where she LOVES getting to meet and hang-out with readers. The only problem being she tends to get lost in her hotels. So if you ever see Jill Shalvis roaming the halls, someone please return her immediately.

Connect with the Author:

Jill Shalvis’ Hot Winter Nights takes us back to Heartbreaker Bay.  Molly and Lucas are wonderful together.  I was hooked into their story from the start.  Molly is working to catch a Bad Santa not realizing her brothers enlisted Lucas to keep her safe.

Great characters that will have you laughing out loud, I loved this revisit to Heartbreaker Bay.  While Hot Winter Nights is part of a series, this latest can be read as a standalone.  I’m already looking forward to my next visit to Shalvis’ Heartbreaker Bay.