All of Petal, Georgia, is waiting for the last Chase brother to fall. At least, that’s how it feels to firefighter Matt Chase, who’s getting a little anxious himself. His brothers have all found love—why hasn’t he? But fate, in the form of a curvaceous hairdresser, is about to change that.

Salon owner Tate Murphy has come a long way from her trailer-park roots, taking care of her seven siblings along the way. Even though she’s put the past behind her, she knows someone like Matt Chase is way out of her league. But that doesn’t stop her from getting a good eyeful every chance she gets.

When a car accident throws them together, Tate gets more than an eyeful—she gets the whole package. Not that she’s complaining. But when small-town bias and her own insecurities get in the way of their relationship, Matt will have to prove he doesn’t care where she came from…only where she goes.

The Chase is on. One small town. Four hot brothers. And enough heat to burn up anyone who dares to get close. Don’t miss the other books in the series: Taking Chase, Giving Chase and Chased.

Matt opened up the box and the heady scent of cookies greeted his senses. Mouth watering, he read the note, ascertained the cookies were from Tate, the woman he’d helped out earlier in the week after the car accident. He vaguely remembered her from school. Perhaps a year or so behind him, definitely not from his circle though.

Knowing she wasn’t a terrorist, he gave in and shoved a chocolate chip cookie in his mouth. And moaned. Holy shit, that was the best thing he’d ever eaten, even better than Maggie or his momma’s cookies though he’d never admit it to them. An oatmeal cookie followed. Nope, that was the best cookie he’d ever eaten. Peanut butter chips in oatmeal cookies? Fabulous. Thank goodness she’d been okay after she’d gotten whacked by that car. The world couldn’t live without this cookie-baking goddess.

Looking at the outside of the box, he realized the address was the beauty salon just across the way. He’d have to go and thank her in person.

He’d saved some folks, helped at quite a few accidents and emergencies and fought fires in and around Petal for the last decade. Still, he could count the number of times he’d received a thank you note on one hand. It felt good to be appreciated.

Finishing up in the late afternoon, Matt grabbed what was left of the cookies, knowing he’d have to work out extra after the dozen or so he’d scarfed down since the mail came. He’d had to hide them from the rest of the weenies at the station who’d have swiped them if they’d known. And with cookies as good as the last five in the box, he wasn’t gonna share.

He’d never been inside the beauty salon though he’d seen it just about every day for years. He had a vague idea that the women in his life got their hair done there, but that was the extent of it.

When he opened the door, the jingle of pretty wind chimes greeted him first, followed by the pleasing sound of feminine laughter. Oh how he loved the sound of a woman’s laugh.

Smiling, he headed toward it. He saw her before she saw him. Her hair was the prettiest blonde he’d seen on a woman and unless he was mistaken, she came by it naturally. It hung in a high ponytail and still cascaded down her back in a long spiral curl. Those wide blue eyes of hers were set off by some floaty-looking blouse that was a sort of pinkish-orange. He was sure they had a name for it, women always had names for colors like that. He’d say that Nicholas had light green walls in his room but Maggie had told him they were sea-foam green. He’d just looked at his brother over her head and Kyle rolled his eyes back at him.

She was short. Like really short. And all curves. Her musical laughter cut off when she caught sight of him and then began to choke.

Dropping his things on a nearby counter he rushed to her, concerned as she waved him off, her eyes widening as she backed away.

“She’s all right,” one of the other women said.

Tate recovered and turned a shade of red he was sure they had a name for too, but it was clear she’d either injured herself or was mortified.

“Fuckety fuck,” she muttered as she tried to catch her breath.

“Are you all right?” He touched her arm.

Her blush deepened as she nodded, sending her ponytail swaying. “Fine. Um, can’t breathe and swallow at the same time. Apparently I forgot that.”

He grinned. “I’m Matt Chase. I just wanted to come by to thank you for the cookies.”

“Oh…oh, I’m glad you got them. I should have just brought them over but I didn’t know when I’d get the chance to get away and my family was sort of trying to steal them and if I hadn’t wrapped them up they’d have ended up at the University of Georgia with my kid brother and sister.”

He couldn’t stop grinning. The woman was like one of those little dogs with all the energy. “It’s fine. They’re really good. Like criminally good. In fact, and if you repeat this, I’ll deny it, they’re the best cookies I’ve ever eaten. You missed your calling you know. You should have opened a bakery.”

“Her cookies are a drop in the bucket. She makes a peach cobbler that’ll bring tears to your eyes and the most perfect scratch biscuit you ever tasted. That’s until you try her chicken paprika,” one of the women, clearly a relative, told him proudly.

“Stop it now. I already said you could have Saturday off.” Tate winked and the other woman laughed. “Oh, my manners! I’m Tate Murphy. Aside from bleeding all over you the other day, I figure we haven’t been formally introduced.”

He shook her hand, still wearing a stupid grin.

“This is my sister Anne and the sister just younger than her, Beth.”

He nodded to all of them and noted they all had the same nose but they were redheads with green eyes while Tate had blue eyes and blonde hair. She was also a lot shorter than the other sisters, who were at least five-seven or so.

“Nice to meet you all. I think I know your brother Tim. He and I were just a year apart in school. We had a few classes together. Redhead right? Green eyes? Freckles?”

“He’s a nice guy. Tell him I said hello. Well, I don’t want to keep you all. I just wanted to thank you for the cookies.”

“Well, thank you for helping me. A few cookies are nothing in comparison.”

He liked her smile. Wide, open.

“I’ll see you around then.” And he realized that he’d never bumped into her at all around town. Which was sort of silly considering they worked right across the street from each other.

“Night, Matt. Nice to meet you. Your mother talks about you all the time.”

He stopped as he’d reached the door and heard her laugh. “You knew that’d get me, didn’t you?” he said, looking back over his shoulder at her.

Her eyes widened in mock surprise. “Me? I have seen you naked though. With a cowboy hat on even.”

He groaned, knowing the picture. His momma did love to show that picture of him at about eighteen months old, naked as a jaybird wearing a cowboy hat.

“Are you imagining me naked now?” he teased back and she blushed bright red again. He toyed with asking her what women would call that shade of red but decided against it. He winked and waved. “See you around, Tate Murphy.”

He whistled all the way to his truck. 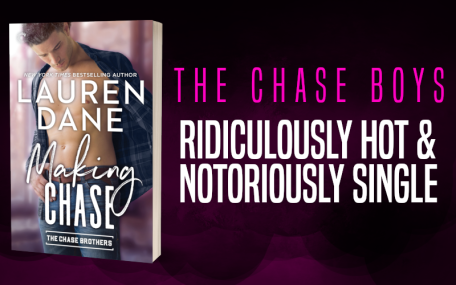 To celebrate the release of MAKING CHASE by Lauren Dane, we’re giving away a $25 Amazon gift card to one lucky winner!

GIVEAWAY TERMS & CONDITIONS:  Open to internationally. One winner will receive a $25 Amazon gift card. This giveaway is administered by Pure Textuality PR on behalf of Carina Press.  Giveaway ends 9/3/2018 @ 11:59pm EST. Limit one entry per reader. Duplicates will be deleted.  CLICK HERE TO ENTER!

The story goes like this – While on pregnancy bed rest, LAUREN DANE had plenty of down time so her husband took her comments about “giving that writing thing a serious go” to heart and brought home a secondhand laptop. She wrote her first book on it before it gave up the ghost. Even better, she sold that book and never looked back.

Today Lauren is a New York Times bestselling author of over fifty novels and novellas across several genres.

This promotion is brought to you by Pure Textuality PR.

Making Chase is the fourth and final in Lauren Dane’s Chase Brothers series. I’ve enjoyed every visit to Dane’s Petal, Georgia. I admit I’m sad to see the end of the Chase Brothers with Matt Chase’s story.

We get a sweet, hot, opposites attract romance with Matt and Tate. I loved seeing the last Chase brother find his HEA. Dane chose well in the wrap up in this series. I would love another visit back to Petal…