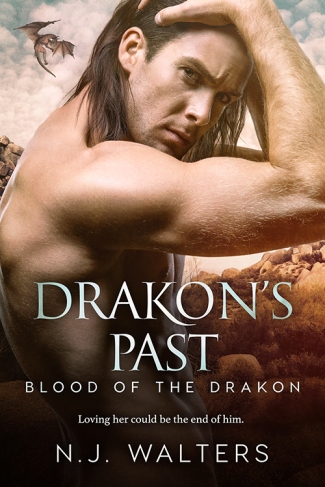 Drakon’s Past by N.J. Walters

Constance Owens has a gift for finding unique items in the most unlikely places, which comes in handy since she buys and sells artifacts and antiques for a living. When she purchases a set of four dragon statues, she has no idea just how unique they are, or that finding them will thrust her into a world of secret societies, men who think nothing of kidnapping and murder to get what they want, and dragon shifters.

Nic hasn’t survived for four thousand years by letting his guard down, and he doesn’t trust anyone except his drakon brothers. The loneliness haunting him has been getting worse since all his brothers have found their mates. And when he finds the woman his drakon recognizes instantly as his fated mate, he doubts he’ll ever have what his brothers have, because it seems she’s involved with the secret society of hunters who have been hunting and capturing his kind for hundreds of years.

Nic didn’t want to frighten Constance any more than she already was, but she deserved the truth. Jeremiah Dent was on the list of current members of the Knights that Tarrant was compiling. His brother would lose his mind if he knew what Nic was telling her. Too damn bad. He could no more lie to her than he could harm her.

There was something about her that made all his senses sing. He wanted about a month with her in his bed to sate his desires. Because he wanted her. More than he’d wanted a woman in a very long time.

That made her dangerous. It also made her irresistible. But first they had to deal with the Knights and rescue her sister. He only hoped they were able to do both without the Knights learning about him and without either of the women being harmed. It made him sick to his stomach how easily the Knights involved innocent people in their quest for power.

Of course, Tarrant would tell him no one was innocent. Or he would have before he met his Valeriya. His brother had mellowed. Nic almost laughed and shook his head. No, Tarrant hadn’t mellowed in the least. If anything, he was more cynical than ever.

“Constance?” He was getting worried about her. She was staring up at him, a blank expression on her face.

“A secret society that believes dragons are real?” When he nodded, she started to laugh. There was a slight hysterical edge to it that concerned him. Apparently, this last revelation was the final straw for her.

She shook her head. “What’s next? Dancing frogs? A wizard? This is crazy. All I did was buy a few things at an estate sale. Now I’m in the middle of a bad B movie.” Each word she spoke got louder, until she was practically shouting.

Nic did the only thing he could think of to quiet her. He kissed her.

She made a small sound of distress in the back of her throat. He knew he should stop, should take a step back.

He slid his tongue into her open mouth and tasted her. He caught a slight hint of peppermint, either from a candy or toothpaste. He couldn’t be sure. Underneath it all was the sweet, sultry taste of woman.

She put her hands against his chest. Instead of pushing him away, she fisted her fingers in his shirt and clung to him. Constance was much shorter than him, so he slid his arms around her and lifted her right off her feet. He loved having her in his arms, loved the press of her body against his.

He angled his head and plunged back into her mouth, devouring her. He couldn’t get enough. She was like all his favorite foods all rolled into one, and as a drakon, he had a voracious appetite.