Daniella Alvarez and Dylan McKendrie used to be in love. They used to be a team. An inseparable force to be reckoned with. But, when tragedy struck, their relationship sank faster than the ships they used to scour the ocean floor for. Now all that’s left are scattered remains of what used to be.

Dylan, no longer seeking the mysteries on the ocean floor, now goes for the sure things and the guaranteed paychecks. When a longtime friend suggests he has hard proof that one of those legends that used to keep Dylan up at night could be real, he’s torn between going after the gold and maintaining the life he’d built since leaving The Florida Keys.

Daniella was always a dreamer. She’s always been chasing what would most deem unattainable—professionally and personally. Everything she’d ever wanted seemed to slip through her fingers the day he left, which is exactly why his return has her seeing red.

Can the two of them put their past aside long enough to figure out a mystery that has plagued them both for years? Can they work together to see what lies below the surface? 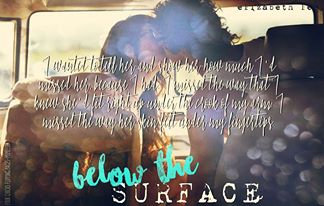 “Would you wait just a goddamn second,” I said when I finally caught up to her. She was halfway to the ocean and just about to sit down in the sand to pout. Just like her. Things get a little heated and she’s running for the water to avoid an actual conversation.

“Why? So you can tell me how I’m wasting my time on ghosts. How I just chase every lead I get without thinking things through?” A part of me wanted to put my hand over her mouth and shut her up, but another part of me reasoned I could do the same with my lips. The urge to kiss her had my blood overheating. “Like I said before…We. Don’t. Need. You.”

“No I don’t,” she quickly replied. “You left and I’ve been doing just fine.”

“I’m not talking about you in particular, Miss Impulsive.”

“Oh.” She paused for a second but quickly recovered. “I know you’re not talking about me.”

“I’m talking about that fact that I have the boat,” I pointed out. “I have the equipment you need to bring this so called ship up out of the water.”

“Whatever. I can find a boat anywhere.” She crossed her arms across her chest and glared.

“Oh yeah. That right? ‘Cause from what I’ve heard, the only boat you’ve been on lately comes equipped with a snorkel and tourists.”

“Keeping tabs on me, McKendrie?” The edge in her tone was sharp enough to raise the hairs on my arms. I might have occasionally asked Cal about her, but I wasn’t going to fess up at that moment. “Can’t imagine that you could even be bothered to check on what you left behind.” Her words stung just as badly as I expected them to.

“I shouldn’t.” I was still pissed too. If she wanted to play who can be the bigger asshole, I was going to win. I was part Irish and there wasn’t a chance in hell that I was going to let her get the better of me. She wasn’t the only one with a fiery temper. “Not a damn thing has changed.”

“I’ve been called worse.” I took a step toward her. “Probably by you.”

“I can guarantee that,” she said between gritted teeth. The ever present noise of the ocean, the sound of traffic and the island town vanished as we held each other’s stare.

The two of us stood inches from each other on that beach. The tide rolled in over our feet and I was so mad that I didn’t even care that my best pair of boots were wet. The sand and surf were bearing witness to a good old fashion showdown. I could practically see the steam rolling off of her as I tightened my gaze.

Her lips were parted, words threatening to tear into me, but neither of us spoke. Instead, we just waited for the other to break. 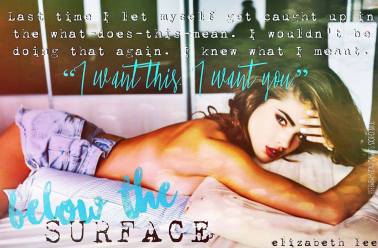