His gaze drops to my lips, and I am suddenly and painfully aware of his body pressed tightly against mine, his arms around me, and his heartbeat quickening, as if it’s oblivious to the fact the danger has passed. I’ve never been this close to him, never seen his eyes so dark, never imagined I would feel the power thrumming through his body. Because aren’t predators supposed to kill?

Unspent adrenaline screams through my veins, turning my legs liquid. I ache with a desire I shouldn’t feel. A painful, desperate hunger for a man I should not want—a man whose violent nature both arouses and frightens me.

“Ray…” His name is a whispered plea on my lips.

He threads his hand through my hair, tugging my head back so hard my eyes tear, but I have never felt such pleasure in pain.

“Christ. I’m barely in control as it is.”

A soft moan escapes my lips. I am hot—so hot, I might combust— and before I can stop myself, I rock up, thread my hands through his hair, and touch my lips to his in a gentle kiss.

Ray stiffens and growls, the sound vibrating through my chest. He deepens the kiss, his tongue sliding between my lips to explore every inch of my mouth. My heart speeds to double time, but it is the way he holds me still—one hand tangled in my hair, his other hand firm around my back—that sends a wave of liquid heat through my veins. His lips are firm and demanding, forcing my mouth open as his tongue plunges deeper, stroking me into oblivion. Possessive. Demanding. Unyielding. A Predator’s kiss.

Sliding my hands over his magnificent chest, taut and hard, and then along his broad shoulders, I drink him in with a never-ending thirst. Hot and hungry, my tongue tangles with his, questing, seeking, wanting more as I grind my hips against his thigh in an entirely unchar- acteristic display of need.

My actions inflame him. In one smooth movement, he spins us and backs me into the cold, brick wall. His arm tightens so hard I can barely breathe. And then he ravages my mouth, his tongue questing deep, as if he has lost control and the beast within will settle for nothing less than devouring me.

I have never really, truly been kissed. Until now. I feel him with every inch of my skin, every breath I take. My breasts ache for his touch, my clit throbs for his attention, and my heart pounds in warning.

But when I moan into his mouth, he tenses and pulls away. “Condition I’m in now…it’s like after a fight…I got no gentleness in me.”

Bloodlust. The aftereffect of a fight. The edge of control. But I have watched Ray for so long, lusted after him for so many nights, imagined I was the one in the ring pinned to the mat, I do the unthinkable and lean up and nip his lip. Hard. 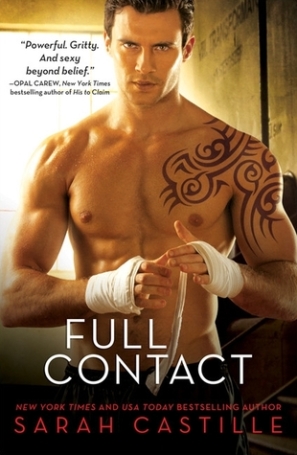 Ray wraps his arms around me and holds me tight as if something terrible has happened and he doesn’t want to let me go.

Full Contact. This is how Ray speaks when his emotions overwhelm him. I melt into his stillness. His body is hot and hard, his breath warm on my neck. He smells of leather and sweat, sex and sin. Nothing can tear me away.

Sia O’Donnell can’t help but push the limits. She secretly attends every underground MMA fight featuring The Predator, the undisputed champion. When he stalks his prey in the ring, Sia is mesmerized. He is dominant and dangerous and every instinct tells her to run.

Every beautiful thing Ray “The Predator” touches he knows he’ll eventually destroy. Soft, sweet and innocent, Sia is the light to Ray’s darkness-and completely irresistible. From the moment he lays eyes on her, he knows he’s going to have to put his dark past behind him to win her body and soul. 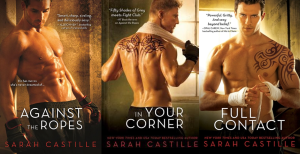 Against the Ropes (Book One)

In Your Corner (Book Two)

Struggling attorney Hope Kendall loves her outlaw biker boyfriend Rochlan “Rock” North with all her heart, but the questionable activities his motorcycle club is involved in threaten her legal career. But does she even want this career anymore?
As a near-death situation makes their professional differences seem insignificant, a cloud descends over their personal relationship’s already unsteady future.
Even though Hope seems to have finally found her niche in the club as Rock’s ol’ lady, can she mingle in politics with neighboring clubs as well? A trip to the Lost Kings MC downstate charter will put her to the test.
While Rock works hard to give Hope the honesty she craves without betraying his loyalty to his brothers, tension from outside forces threatens to push him to the brink. But it’s the one secret Hope has hidden all along that may finally drive them apart for good.

Leaning down, Rock touches his forehead to mine. “Sway is the president here. His ol’ lady is Tawny. You’ll probably hang with her for a bit.” He pauses, and I get the sense he’s about to say something he thinks will tick me off. But I’m so out of my element it would take a lot for me to get upset right now. “Try to, uh, just observe her, okay?”
If I hadn’t already been warned ahead of time by Trinity, I wouldn’t know what to make of that. I’ll have to remember to text her a thank you later.
“Trinity explained she runs a tight ship here,” I tell him.
His mouth quirks. “Yeah, that’s one way to put it.”
Rock hasn’t said a lot about what this trip means. But thanks to Trinity, I have an inkling it’s more than just a social visit. I’m determined not to do anything that will make him worry or embarrass him.
“Listen and learn?” I ask him gently.
A look of relief washes over his face. “Yeah. You got any questions or get upset about something you see, we’ll talk it out when we’re alone, okay?” he promises me.
I can do this.
“Yup.” I give him a quick peck on the lips, then step back and shrug off his sweatshirt. Smoothing my hands over my vest and loosening my ponytail, I paste a smile on my face.
“Let’s do it.”
As we approach the building, two large men step out of the shadows. They seem to be guarding the entrance.
“Evening,” one calls out.
As we get closer, I see they’re both wearing black leather cuts but no visible patches on the front. The guy on the left eyes Rock. “Oh shit. Sway said to be lookin’ out for you. Hey, Mr. North.”
Poor guy seems confused about how he should address Rock. Next to me, Z bumps me with his elbow and smirks.
Rock threads his fingers through mine and leans down. “Brace yourself,” he whispers.
I assume he’s kidding until the two prospects open the doors. It’s a fight not to clap my free hand over my mouth like some prude. 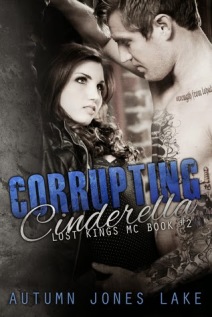 Amazon US I Amazon CA I Amazon UK I Amazon AU

Amazon US I Amazon CA I Amazon UK I Amazon AU

Website I Facebook I Amazon I Goodreads I Twitter
When she’s not writing, Autumn spends time listening to music, going to concerts, and driving her family nuts. She enjoys reading, gardening, acting, and collecting nail polish. (Her husband says she shouldn’t be allowed to include gardening in her list of hobbies, because she makes him do all the work, but that’s not relevant.)
Autumn lives in Upstate New York with her husband and their three rescue dogs. She is actively involved with several dog rescue groups and her local RWA chapter.