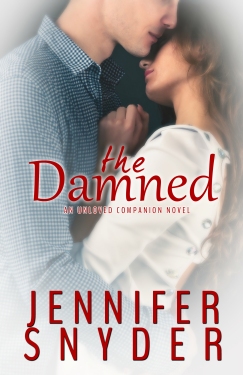 Cover designed by Once Upon A Time

Cole Porter knows his home life isn’t ideal, but when a situation arises and he’s forced to pack up and move on, he realizes it’s better to be in a position where you understand the ins and outs rather than to be tossed into the unknown.

Emory Montgomery is as close to perfect as she can possibly be—good grades, beautiful, poised, popular—but having it all isn’t always enough. Perfect has its drawbacks, and even the most flawless people crack under its pressure.

There are people who come into our lives for a reason, when everything else is shattered, burned, and bruised. Sometimes their purpose is clear, but often the smoke and the brokenness conceal the light.

THE DAMNED can be read as a standalone novel.

NEW COVER FOR THE UNLOVED

Julie Porter learned the hard way that trust is something which must be earned and not something to be given out lightly, those who say they love you are those who hold the power to hurt you most, and best friends can help you survive anything—until they move away.

Nick Owen knows a thing or two about a hard life. At a young age Nick learned how to take a hit and to make lemonade out of the lemons life tossed his way. Returning home after nearly two years of being away, all Nick cares about now is protecting his mom from the abusive hands of his father and catching up with his best friend—the girl who lived across the street, the girl he can’t seem to stop thinking about.

Finally reunited after two years apart, Nick and Julie are about to learn that age does nothing to protect you from life’s trials and tribulations, heartache and loss, but maybe together they’ll find a way to survive.

Jennifer Snyder lives in North Carolina were she spends most of her time writing New Adult and Young Adult Fiction, reading, and struggling to stay on top of housework. She is a tea lover with an obsession for Post-it notes and smooth writing pens. Jennifer lives with her husband and two children, who endure listening to songs that spur inspiration on repeat and tolerate her love for all paranormal, teenage-targeted TV shows.

SHATTERED SOUL was my debut novel and no, you haven’t seen the end of me yet…