The first book in the series, KILLING SARAI, will be on sale for a limited time for $1.99 (Kindle and Nook) starting October 1st. 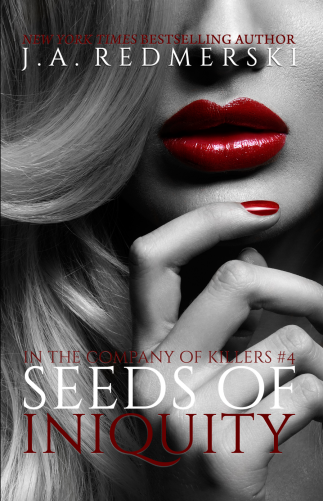 In the Company of Killers

Victor Faust’s new Order is growing. Business is good as there is no rest for the wicked in an underground world of hardcore criminals and contract killing. Relationships among the operatives have changed little over the past year—but things are about to change now, and all six high-ranking members of the new Order will be blindsided by an unlikely enemy.

Loved ones whose only ties to Victor’s organization are their relationships with its members, are abducted. The price to get them back safely—the six must confess their deepest, darkest secret to this mysterious young woman named Nora, who is as deadly as she is beautiful, and who seems to know more about each of them than they know about each other. And although no one has any clue about who Nora really is, it becomes clear that she also isn’t who she appears to be.

So much more is at stake than secrets and the lives of innocent loved ones; with each member that Nora forces to confess, the truth about their dark pasts and their present objectives will cast suspicion, pit some against each other, and may tear others apart.

Before the game is over everyone will know who this woman is and why she is here, but the damage she will leave in her wake could be the beginning of the new Order’s destruction.

Whose dark secret will be the darkest of all? And can Victor’s Order survive any of them?

IMPORTANT NOTE: SEEDS OF INIQUITY is NOT a prequel about Fredrik Gustavsson as previously stated. It is a brand new present day book.

Something inside of me snaps, and my eyes spring open wildly in my face. I scream out something I can’t even decipher and finally get my fingers between the chain and my throat. I pull it away with everything in me, spurred on by rage and vengeance and the will to live, until I overpower her and set my neck free, slamming her legs down against the floor.

She starts to crawl away on her hands and knees in the direction of my overturned chair. I leap to my feet, pulling Pearl from my boot before I’m fully upright, and I’m standing over her with the blade against her throat and the back of her hair in my fist, pulling her neck back as far as it’ll go without snapping.

“I’ll cut off more than your finger, bitch!”

She freezes; her hips and pelvis and legs pressed against the floor; the whites of her eyes visible to me as I stand over her from behind.

“Where is Dina?!” I yank on her scalp, pulling her neck back even farther; if she even flinches the wrong way the blade will break the skin and she knows it. “Fuck these games of yours! Tell me where you took her!”

“Come closer and I’ll tell you,” she says with difficulty, her voice strained.

Without even thinking about it I do, but I keep the blade against her throat as I sit down on her back.

“Try anything and I’ll kill you,” I growl, my lips next to her ear.

She doesn’t try to fight back, but I’m not feeling defeat from her. It’s something else. That confidence about her that I’ve grown to despise. Even though I’m the one sitting on top of her, the one with the knife pressed to her throat, I can’t help feel like she’s still the one in control.

“Where is she?” I whisper harshly against the side of her face.

“If you want Dina Gregory to live,” she says, still in a whisper too low for the audio to pick up, “then you and I need to have a talk about the specifics of the relationship you had with Javier Ruiz.”

It feels like an eternity that I sit on top of her, straddling her back, lost in some kind of stunned submission. I can’t find words. Or my heartbeat. And my mind is running away from me.

Then my knife hand begins to tremble and my breathing becomes unsteady.

I slide the knife away from her throat, push her head down forcibly against the tile with the other hand, shoving myself angrily to my feet and off of her. I don’t look at her when she gets up, struggling into a stand with her ankles bound. And I look only at the floor when she shuffles right past me, picking up her black heels along the way, and goes back over to her seat on the other side of the table.

I keep my back to her, unable to move; my eyes beginning to burn from the angry tears pushing their way to the surface. My knife is gripped within my hand firmly, resting down at my side. I feel like using it on myself.

“Shall we begin?” Nora says as calmly as ever, waiting for me at the table.

The author is giving away (3) Signed Sets of the In the Company of Killers Series! If you would like to enter, please visit AToMR’s Facebook page.

J.A. Redmerski, New York Times, USA Today and Wall Street Journal bestselling author lives in North Little Rock, Arkansas with her three children, two cats and a Maltese. She is a lover of television and books that push boundaries and is a huge fan of AMC’s The Walking Dead.