End of the Lie (Anastasia Phoenix #3) by Diana Rodriguez Wallach

With her harrowing tale of espionage and near death experiences finally out in the open, Anastasia Phoenix thought things would be better. That she and her friends had outsmarted Department D, the criminal empire her parents helped create.

Former friends have turned to enemies, causing more innocent lives to get swept up into the dangerous world her parents created. Now it’s up to Anastasia to stop the damage before anyone else gets hurt—or worse. She embarks on a treacherous trail from Poland to Prague, and old rivals emerge at every turn. But when the final confrontation occurs, will she be too late to protect the ones she loves… or even herself?

“Hi. My name is Keira Phoenix, and I am the daughter of international criminals. In May, I was kidnapped by a man named Craig Bernard who, at the time, I thought was my boyfriend. We had met weeks before at a bar in Boston. The anniversary of my parents’ death had just passed, so I was upset when he showed up, acting nice. [She scoffs, rolling her eyes.] I invited him to a party I was hosting, then later that night he drugged me and took me from my home.

“I don’t remember the abduction—one minute I was in my bed, the next I’m waking up on an airplane, my head pounding and my hands bound together with plastic cable ties. [She rubs her wrists.] I was held captive in Italy for months, by armed guards, and I had no idea why. Eventually, I learned that Craig Bernard and all of the men involved in my kidnapping used to work for my parents. Only not as engineers for the Dresden Chemical Corporation. They were spies. All of them, especially my mom and dad. It turns out that my parents, along with Randolph Urban, CEO of Dresden, conspired to create a criminal enterprise known as Department D, which stretches back long before I was born. We have photographic proof that my parents were involved in the assassination of Italy’s Prime Minister Aldo Moro in 1978, and we have a journal, in my father’s handwriting, and eyewitness testimony that proves he was involved in the fake terrorist plot that defamed nearly a half dozen Islamic women in London two years ago along with the reporter who covered the story, Julian Stone.

“I believe I was taken by enemies of my parents as payback for their past criminal activity. Evidence of my time in captivity is undeniable. [For the camera, Phoenix holds up a proof of life photo with a church bulletin, and a posed photo of her body in the trunk of a car.] I was rescued by my sister, Anastasia, and her friends, who acted alone, because the Boston P.D. refused to listen to them, for reasons none of us understand. After my rescue, my sister, her friends, and I made statements to Italian law enforcement and the CIA, and I was instructed to stay in hiding for my own protection. But I was never safe. No one around us is safe. Tyson Westbrook, a seventeen-year-old friend of my sister’s, was murdered recently as a way to get to us, to lure me and Anastasia out of hiding. When that didn’t work, when we continued to fight, these people poisoned one us—Marcus Rey, son of Dresden executives Carlos and Rosario Rey.

“They’re picking us off one by one, and we don’t know how high up the corruption goes. Our parents were hired by world leaders to create propaganda for decades. Now these same people are covering up their crimes against us—including kidnapping, poisoning, and murder. They’re trying to silence us, take us out, and prevent us from exposing the truth behind Department D and its shell corporation, Dresden Chemical.

“We won’t stay in hiding.

“And we won’t trust law enforcement to act on our behalf.

“That’s why I’m coming forward now. I’m telling my story, in my own words. I need the world to know what’s going on, so hopefully no one else gets hurt.

“I’ve learned a lot about my parents recently, and you will, too, over the coming weeks. They did a lot of bad things. I know that. And they might even still be alive. [She cocks her head.] I’ve heard the rumors, like you, but I swear, if they are, I haven’t seen them.

“However, I am certain that the only way my sister and I will ever be safe is if we bring down the Dresden Chemical Corporation and its corrupt underbelly, Department D. We need to take back our lives and stop paying for crimes we didn’t commit.

“My name is Keira Phoenix and I survived Department D. But will you?”

OTHER BOOKS IN THE SERIES 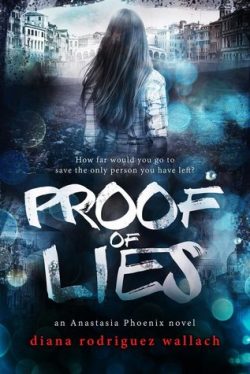 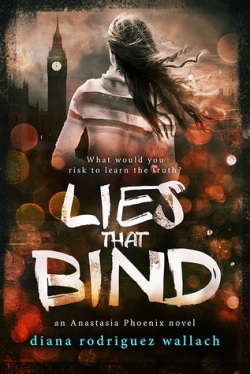 Diana Rodriguez Wallach is the author of the Anastasia Phoenix series, three YA spy thrillers set to debut beginning in March 2017 (Entangled Publishing). She is also the author of three award-winning young adult novels: Amor and Summer Secrets, Amigas and School Scandals, and Adios to All The Drama (Kensington Books); as well as a YA short-story collection based on the Narcissus myth, entitled Mirror, Mirror (Buzz Books, 2013). In 2011, she published a highly regarded essay in Dear Bully: 70 Authors Tell Their Stories (HarperCollins). It was the only essay chosen from the anthology by Scholastic to be used in its classroom materials. Diana is featured in the anthology, Latina Authors and Their Muses (Twilight Times Books, 2015), and she is currently on staff as a featured blogger for Quirk Books. In 2010 Diana was named one of the Top Ten New Latino Authors to Watch by LatinoStories.com, and she placed second in the International Latino Book Awards. She is an advisory board member for the Philly Spells Writing Center, and is a Creative Writing instructor for Johns Hopkins University’s Center for Talented Youth. She holds a B.S. in Journalism from Boston University, and currently lives in Philadelphia.

End of the Lie is the third of Diana Rodriguez Wallach’s Anastasia Phoenix series.  This is where all the loose ends are tied up and questions finally answered.  I’ve enjoyed this series and was looking forward to finding out how things would end.  A YA spy series has been fun to read.  With suspense and action moving the series along, I was anxious to see what would happen next.