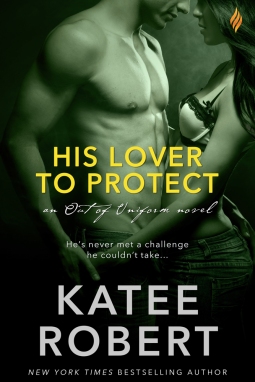 Title: His Lover to Protect

Series: Out of Uniform #3

His Lover to Protect

Former pararescuer, Luke Jacobs never met a challenge he couldn’t take, including Avery Yeung. Fans of Nicolette Day’s No Strings Attached or Maisey Yates’s Unexpected, will devour the sexy addition to the Out of Uniform series by NYT and USA Today Bestselling Author Katee Robert.

Alexis Yeung did everything right….only to watch everything go horribly, horribly wrong. Broken and angry, Alexis high-tails it to Europe, determined to face the world on her own terms and without consequence. Which includes a mind-blowing night with a sexy, scarred stranger.

Except, embittered former pararescuer Luke Jackson isn’t exactly a stranger. He’s supposed to keep an eye on Alexis without her knowing. Ending up in bed together was definitely not the plan. Now he’s chasing her (admittedly hot) ass across Europe, a game of cat and mouse that always ends with the two of them tangled up in the sheets.

Something in their scarred, damaged souls calls to each other. And God help them, the sex in unbelievably hot. But if Alexis discovers who Luke really is, he’ll lose the one thing that makes him feel whole…

The elevator ride passed in a blur, and he towed her down the hall to his room. The door barely shut behind him when he pinned her against it. “You’re mine now.”

Even as she wrapped her legs around his waist, she shook her head. “For tonight.”

He wanted to rail against the limitation, but Luke was more concerned with getting her out of her clothes. With one punishing kiss, he moved to the bed and dropped her on it. Before she had a chance to right herself, he yanked off her boots and tossed them behind him. “Unbutton your pants.”

“Bossy, bossy.” But her voice was breathy, and her hands shook as she followed his order. He helped her get them over her hips and then peeled them off her legs, leaving her in only her white knit top and a thong with a shamrock that read Lucky You.

“Don’t let it go to your head.” She sat up, and he stripped off her shirt and bra. The panties could stay…for now. Alexis propped herself on her elbows and raised one slim leg to poke him in the chest with her foot when he started to crawl onto the bed. “Your turn.”

All he could see was her smooth skin and dark pink nipples. When she poked him again, he finally focused on her face. “What?”

“Your clothes. Get rid of them.”

For the first time since he’d kissed her, Luke paused. He hadn’t been with anyone in a long time. Hell, he could pinpoint the exact time because the woman had taken one look at his mangled knee and hightailed it out of the room. And that was after she cringed at the sight of his scars elsewhere. He couldn’t stand the thought of Alexis flinching from him. “Not yet.”

First, he was going to drive her so far out of her mind with pleasure that she wouldn’t have the ability to remember her own name, let alone worry about his damaged body.

See where it all began with book 1 of the Out of Uniform series, In Bed with Mr. Wrong.

New York Times and USA TODAY bestselling author Katee Robert learned to tell her stories at her grandpa’s knee. She found romance novels at age twelve and it changed her life. When not writing sexy contemporary and speculative fiction romance novels, she spends her time playing imaginary games with her wee ones, driving her husband batty with what-if questions, and planning for the inevitable zombie apocalypse.  Connect with Katee at: Website | Facebook | Twitter | Google + | GoodReads | Instagram | Tumblr | Youtube

Catch up on the Out of Uniform series:

In Bed with Mr. Wrong

Falling for His Best Friend