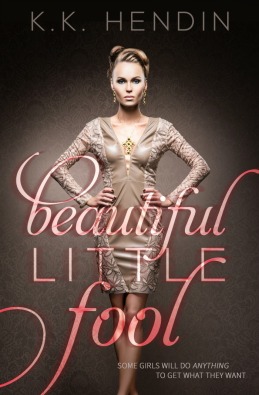 He doesn’t deserve them.

He doesn’t know what to do with them.

That will should have had her name.

His looks are a bonus.

Her looks are her weapon.

He’s fighting a losing battle against his heart.

He doesn’t know it yet.

She gets everything she wants.

He’s what she wants.

Love has nothing to do with it.

To get to where you’re going, sometimes you need to step on a few people to get there.

Good thing her heels are sharp.

I’m not sure there’s much I can say about Beautiful Little Fool without spoiling the read.  Beautiful Little Fool is definitely not what I was expecting.  I loved that it was different from what I’ve read by K.K. Hendin in the past.  The read is quick but will have you wondering more than once about what you’ve just read.  I know I’ll be rereading BLF again soon, while waiting on more from Hendin.

KK Hendin’s real life ambition is to become a pink fluffy unicorn who dances with rainbows. But the schooling for that is all sorts of complicated, so until that gets sorted out, she’ll just write. Preferably things with angst and love. And things that require chocolate.

KK spends way too much time on Twitter (where she can be found as @kkhendin), and rambles on occasion over at http://www.kkhendinwrites.blogspot.com.

Enter to win a NYC Alex and Ani bracelet, a signed copy of BEAUTIFUL LITTLE FOOL, and a NY Coffee Mug. US Only. 2 additional winners will receive a backlist title by KK Hendin.